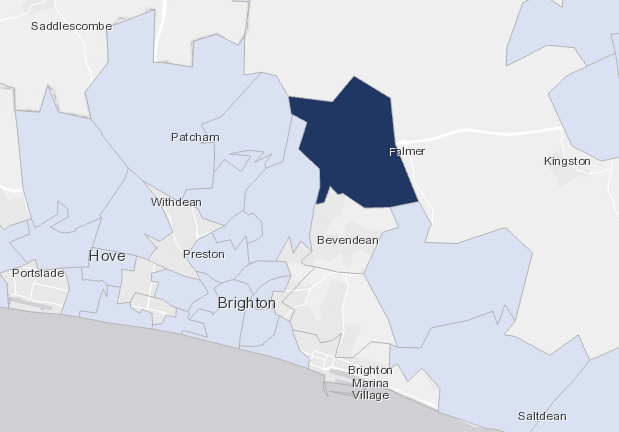 The city’s two universities now have 80 coronavirus cases, just ten days after the first cases of the term were reported.

The University of Sussex, which first reported a small number of cases on Monday, September 28, now has 50 students self-isolating after testing positive.

The University of Brighton, which reported its first five cases last Friday, now has 30 people – mostly students – with a positive test.

Over the last ten days, there have been 224 positive test results across the city.

Brighton and Hove News understands many of the newer cases are those who were self-isolating with someone who had tested positive, either in halls or student houses.

On the government’s map, Coldean and North Moulsecoomb – which includes the Falmer campus and some University of Brighton halls of residence – is the areas with the most coronavirus cases in the south east, with 50 cases from 28 September to 4 October.

A mobile testing unit was set up at Falmer campus for five days from Friday, and was open to anyone with symptoms who booked an appointment.

Meanwhile, cases across the city continued to rise, with 60 new cases published yesterday and 45 today.

The total for the seven days up to 8 October, which the council will use to compare in next week’s report, is now 139, already outstripping the previous seven day period’s tally of 119 with several days’ results yet to be published.

However, with most cases in the city still amongst teenagers and young adults who are generally less affected by the virus, the mortality rate for Brighton and Hove has remained at zero for the 28 days to 6 October.

Data on local hospital admissions is only published at regional level.

“Students are acting responsibly and using our self-reporting tool as soon as they have symptoms, which allows us to act quickly to support them and put measures in place to limit onward transmission, even before they are tested.

“We remain in daily contact with the Surrey and Sussex Health Protection Team (HPT) and Brighton and Hove Health Protection Authority and are following all their guidance, including measures around contact tracing and supporting individuals to self-isolate.

“We are providing a range of services to students who are self-isolating including individual welfare checks, activities to do online and we will soon be sharing details of an enhanced support package that covers food and cleaning provisions.”

The University of Brighton’s covid information page says: “We are taking a range of steps to provide care and support to any of our students who test positive or who need to self-isolate.

“Students living in halls of residence are supported by our Residential Life advisers. Those living in private accommodation who test positive will be contacted by Student Support and Guidance Tutors (SSGTs) who are embedded within each of our Academic Schools.”

Last week, the city council raised its covid alert level from yellow to amber after the number of cases trebled. Although testing had risen by 60%, cases rose by 200%.

The NHS alert for Brighton and Hove, which is based on a three colour green, amber, red system, remains at amber.

At least sixteen schools have now sent children home after positive test results for either staff or students.

And over the past four weeks, four staff members at the Ireland Lodge care home in Woodingdean tested positive during routine weekly testing – some of whom had no symptoms.

As of yesterday, no residents had reported symptoms.