A serial doorstep conman has been jailed for three years and four months after he stole from an 83-year-old woman in her Brighton home. 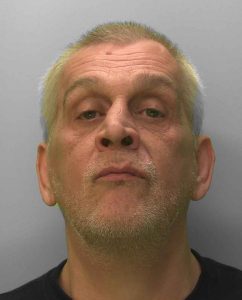 Shaun Shirley, 59, of New Steine, Brighton, was jailed by Judge Jeremy Gold at Lewes Crown Court for conning his way into the pensioner’s home and stealing her purse, bank cards and cash.

Sussex Police said: “A man has been jailed following an investigation into a distraction burglary in Brighton.

“On Sunday 17 January, police responded to a report that an 83-year-old woman has been burgled in Canterbury Drive.

“The victim noticed an unknown man in her front room about 2pm who told her he was a home helper.

“The victim was surprised as she did not receive home help but the man seemed genuine.

“He engaged in conversation before asking to look around the property which she allowed.

“After a while, she queried his presence and asked him to leave.

“She noticed her purse was missing which contained a small amount of cash and her bank cards.

“Following police inquiries, officers arrested Shaun Shirley, 59, of New Steine, Brighton, on suspicion of burglary and theft. He was charged and remanded in custody.

“He appeared in court on Wednesday (17 February) where he pleaded guilty to the offence.

“Shirley was jailed for three years and four months imprisonment and ordered to pay a victim surcharge of £156.”

“Deliberately targeting an elderly person in this way is despicable act and we will continue to pursue anyone that preys on vulnerable people.

“We are pleased with this custodial sentence to prevent him committing more burglaries.

“It is our priority to protect the communities from becoming victims of this impactive crime and our teams work hard every day to identify, target and catch those criminals that commit it.”