Families staged a protest outside Hove Town Hall today (Thursday 13 May) because their children were not given a place at their catchment area schools.

The group of parents and children gathered before a meeting of Brighton and Hove City Council’s Policy and Resources Committee meeting.

They hope that the 62 children, known as “the misplaced 62”, who have been allocated schools two or more bus rides away from their homes, will be found places at their local secondary.

At a full council meeting in March, the group handed in a petition with 2,400 signatures calling for a review of the number of places available at Dorothy Stringer and Varndean School.

But the council has said that Stringer will not take a “bulge” class of an extra 30 pupils this year – as it did for the past three years – because it is at capacity.

The council also said that Varndean was extending its buildings to deal with its increased intake over the past three years and could not take any more pupils.

The Green council leader Phélim Mac Cafferty came out of the town hall before the Policy and Resources Committee meeting that he chaired this afternoon.

He spoke with one of the parents, Lucy Elliott, who told him that she was frustrated by councillors’ silence on the issue.

Mrs Elliott lives just a 10-minute walk from Dorothy Stringer. But the lottery-style school places system meant that her 10-year-old daughter was allocated a place at least two bus rides away at Longhill High School, in Rottingdean.

She said: “They’re without friends. They’re having to take unsafe journeys on their own.

“My daughter is going to have to leave at half six in the morning and probably won’t be returning until after five. She’s born in June. She’ll just be 11.

“Think about doing that journey, commuting as an adult, when the school she picked is less than 10 minutes from our house, where all our friends are going and she feels safe.” 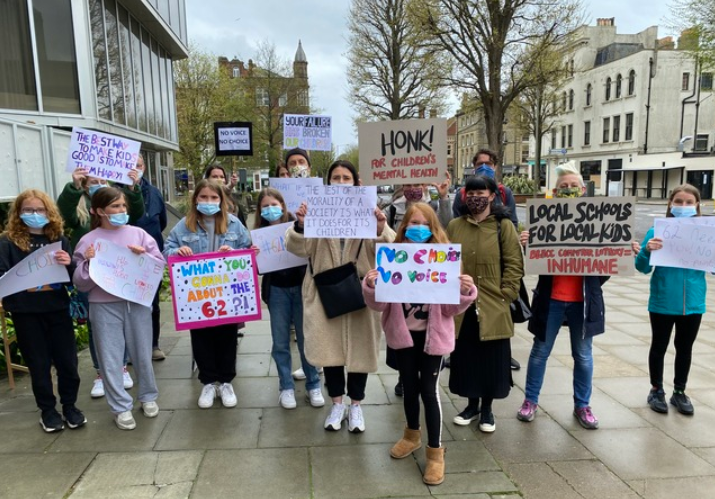 A “Misplaced 62” protest outside Hove Town Hall this afternoon

Another mother Vic Waite joined the protest as a concerned parent even though her family is not affected.

She said: “I’m here because of a sense of enormous injustice. This is a computer’s decision rather than a human decision for our children.

“I woke up on the day we received the email from schools to see what secondary school we would get with my heart in my mouth. It could have been my son travelling one or two hours both ways.”

Amy Hylands, who lives in Queen’s Park, expected that her son would secure a place at Dorothy Stringer after it increased its admission numbers three years ago. But he was also allocated a place at Longhill.

She said: “None of his friends are going there. Hardly anyone (is) from St Luke’s. We thought this was dealt with in 2018. If we’d known early on, we could have changed our choices.”

Sian Hutchinson’s daughter will go past her chosen school, Dorothy Stringer, because she was given a place at Patcham High.

She said: “I feel the children shouldn’t suffer from the incompetence of adults.

“I am protecting her from this at the moment but I hope the council will see some sort of sense and see them as people rather than numbers.”