“I need my own front door” – This is the “lived experience” of a woman living in supported accommodation in Brighton.

Her voice and her story were shared in a deputation, led by Rebecca Rieley, to a meeting of Brighton and Hove City Council’s Housing Committee.

She said: “I was placed in a large mixed hostel in Brighton after leaving rehab.

“At the time I was grateful to not be rough sleeping but, after three years, hostel living ruined my life.

“I am writing this from prison after feeling the only way out was to commit crime.

“I had been on a waiting list for ‘lower support’ housing for over a year but had had enough and no longer felt able to cope living in a hostel.

“As a female, I was often surrounded by men that scared me and had to share living space, bathrooms and dining rooms with.

“I was scared to show the feminine side of myself as this would have drawn mor attention to me and felt unsafe.

“I constantly felt on edge and this is exhausting. The only way I knew to survive was to use drugs to block this out but this would lead to more danger.

“I felt conditioned. It took my identity and privacy. I lost my living skills as I didn’t need to cook and had little responsibility so felt all I had was drugs and it is detrimental to people.

“I was a young carer for my mum and brother as a child and had my own accommodation after, so I have always had responsibility until placed in hostel.

“Living in a hostel took away my belief that I could be independent again and institutionalised me.

“My drug use really increased in the hostel and this became a barrier to moving on but the only way to survive hostel living is to block it out.

“I witnessed regular fights and violence, self-harm, deaths, overdoses and severe mental health which was a trigger for me. 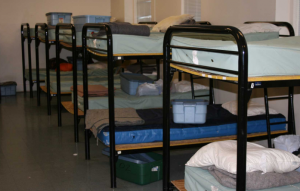 “There is so much sadness, grief and trauma felt by everyone and we are all pit together and its chaos.

“I am very triggered by anger and violence so at times would hide in my room for days as it felt so unsafe to go out.

“I felt like I lost my voice as no one was listening to my struggles or had quick solutions to my situation as there are few options.

“Housing ask people to be stable and reduce/stop drug use before they can move on but have you ever tried to live in this nightmare.

“At night you can hear shouting, crying and people in distress, just like in the day, and you feel vulnerable all the time and can’t sleep or relax so you take something to help you sleep.

“I hate confrontation but was surrounded by it all the time and people changing in and out of hostel with their own struggles and agendas.

“I did things I never thought I would in order to stay safe and survive hostel living. Since being in prison I have had time to reflect and think about what I want.

“I have been able to reconnect with family, with support, and am relocating out of Brighton for my recovery. I never want to go back to hostel living.

“I have got my life back on track. I am now regaining my identity and able to be feminine again as I am not around lots of males.

“I am not using drugs and starting to think about future volunteering and supporting other women with similar experience.

“What I feel would have worked better is the housing first model, where I would have had a home and own front door.

“This would have given me privacy and ability to say who comes in. I would have kept my living skills and received support.

“It’s so sad that I felt my only way out was prison but it has worked for me but has added to my criminal record.

“If I had my own place sooner, I could have got my recovery so much sooner and reconnected with family, who have also witnessed my addiction and struggles.

“Please consider this experience, which I know is shared by most women living in hostels, when housing women and their safety.

“I would love to see the end of large hostels as they ruin lives not support them as people end up stuck for years giving up hope of a better life.

“Thank you for giving me a voice.”