Brighton and Hove Albion have signed a new contract with defender Maya Le Tissier, keeping her at the club until 2023, subject to FA ratification. 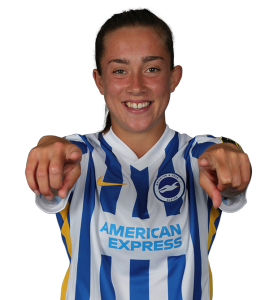 The club said: “The 19-year-old came though Albion’s pathway and made her first-team debut in the Conti Cup in November 2019 against London Bees.

“She has gone on to make 30 league and cup appearances including 21 in last season’s WSL campaign when Albion finished sixth, the highest position in their history.

“The Guernsey-born defender has also represented England at under-18 and 19 level.”

Le Tissier – no relation to former Southampton midfielder Matt Le Tissier despite also coming from Guernsey – is part of Albion’s squad for Sunday’s WSL opener against West Ham United at the Amex.

Albion head coach Hope Powell said: “It’s great news that Maya has committed her long-term future to the club and I believe she will play an important role in our development over the next few seasons.

“She is already a real talent who works extremely hard at her game but I think she is capable of becoming even better.

“I know that playing for England is one of her goals and I believe we can help her achieve that ambition at some stage in the future.”

Maya said: “I’m really pleased to be staying at the club long term. With the profile of the club and the WSL increasing, it’s a great time to be part of what we’re trying to achieve at Brighton.

“We’re also moving into a fantastic new training facility at the American Express Elite Performance Centre in the next few days which I think is massive for the club and our development as players.

“I can’t wait for Sunday’s game and to see all our fans again at the Amex. Hopefully we can start the season with a good performance and three points.”