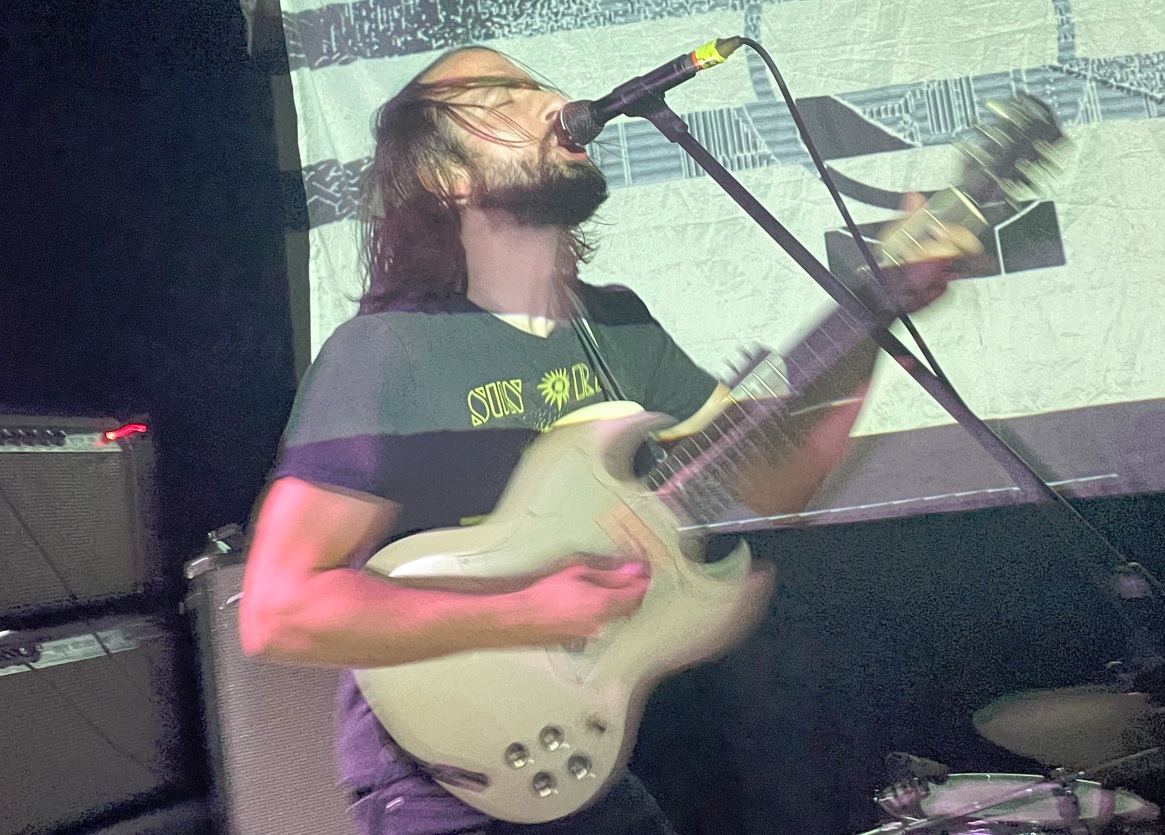 Introduction:
Acid Box Promotions and the Green Door Store are overjoyed to be hosting the incredible SLIFT this evening. The French space psych rock titans whose 2020 ‘Ummon’ LP was a personal highlight of last year’s releases. Fresh off two stunning shows at the new Wide Awake Festival in Brockwell Park London and Manchester Psychfest they will play an intimate sold out gig to 280 very lucky patrons at Brighton’s iconic under the bridge venue, the Green Door Store.

Joining them on Acidbox’s line up tonight is GNOB, the East London Based Eastern/Arabic/ Psych and stoner fuzz rockers with their debut album ‘Electric Dream Demon’ taking inspirations from travels through Indonesia and the black magick tribes. As well as GNOB, Skinny Milk joins as the openers for tonight’s psych delights. The Psychedelic Garage fuzz punk duo from Brighton whose energy and talents were held in high regard by other smoking area inhabitants as the beer flows and excited chatter about finally getting back to live music fills the air. 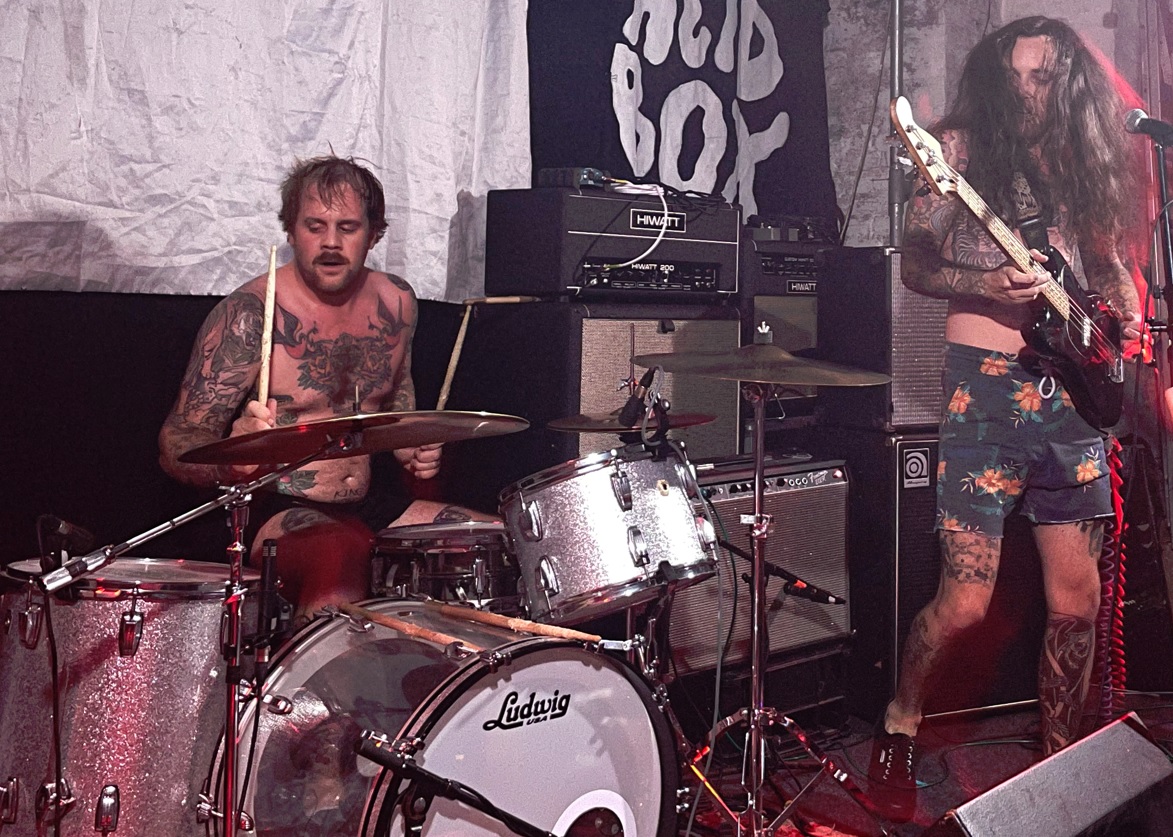 First to the stage is Skinny Milk (stylized as SKiNNY MiLK) who start at 8pm. The duo (composed of Johnny Hart (bass and vocals) and Tim Cox (drums)) take to the stage shirtless with their bodies marked with tattoos dripping down their forms. They open with ‘Alright’ and straight away it is evident that the pair’s sound is deep, guttural and abrasive psych fuzz which combined with the rhythmic pumping from the drums quickly turns the heat up within the intimate performance space. Long hair flicking and flowing as a gleam of sweat holds onto the duo as they power through their 30 minute long set which they pack with both new and old songs which offer such variety. It’s fuzzy yet balanced which flows through peaks and troughs of sound. There are some Desert/Doom influences at points and it is carried by the heavy pedal use making a huge amount of sound from just the two instruments. The only criticism I can offer is that the vocals sound a little muddy at points, but other than this it’s an almost perfect opener for tonight’s event. The twosome end on their 2017 track ‘Creature’ which when combined with the great lightshow and energy from the crowd really sets the vibe for the evening ahead. They leave the stage at 8:30 to much applause from the rowdy crowd

If you feel like checking these guys out here is a link to streaming: 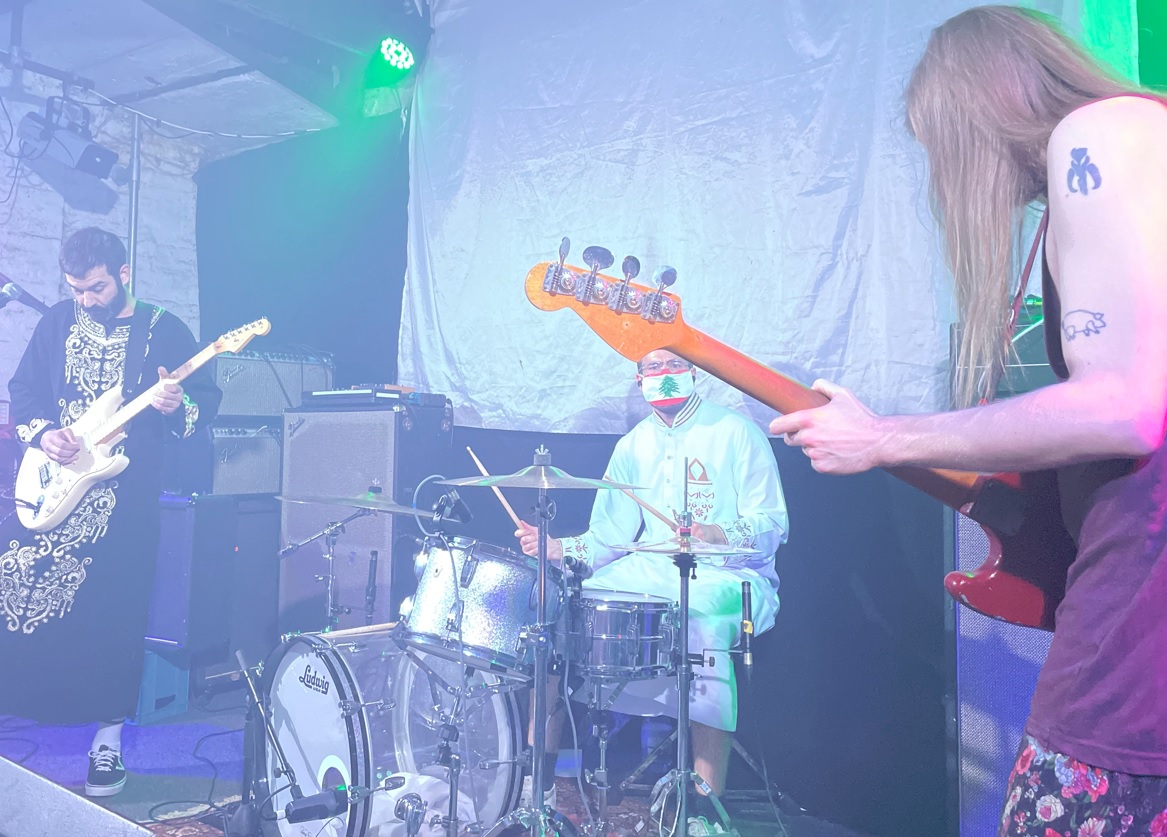 Second to the stage tonight is GNOB. The 3 piece power trio comprised of Nicholas Georgio (guitar and vocals), Rich (drums and percussion) and Ben Kenobi Le Marchant (bass guitar and backing vocals). Getting to the stage at 8:45, the three-piece instantly start shredding away with their first song of the set ‘The Offering’ which features noodling screeching guitar instrumentation from Nicholas. Two members of the band are wearing robe garb of middle eastern, potentially Lebanon because the drummer Morten is wearing a mask of the flag of Lebanon, but I can’t comfortably say that for sure. The mask is a small reminder of the last year and half but everyone’s safety is always important. Smoke wafts onto the stage from a fog machine as the band dips through breakdown to breakdown with each extended slippery moaning greasy guitar solo. The crowd is really into it and they make a great support for SLIFT, different enough to be fresh, but with a rhythmic pumping of the atmosphere ready for a throwdown at the main event. 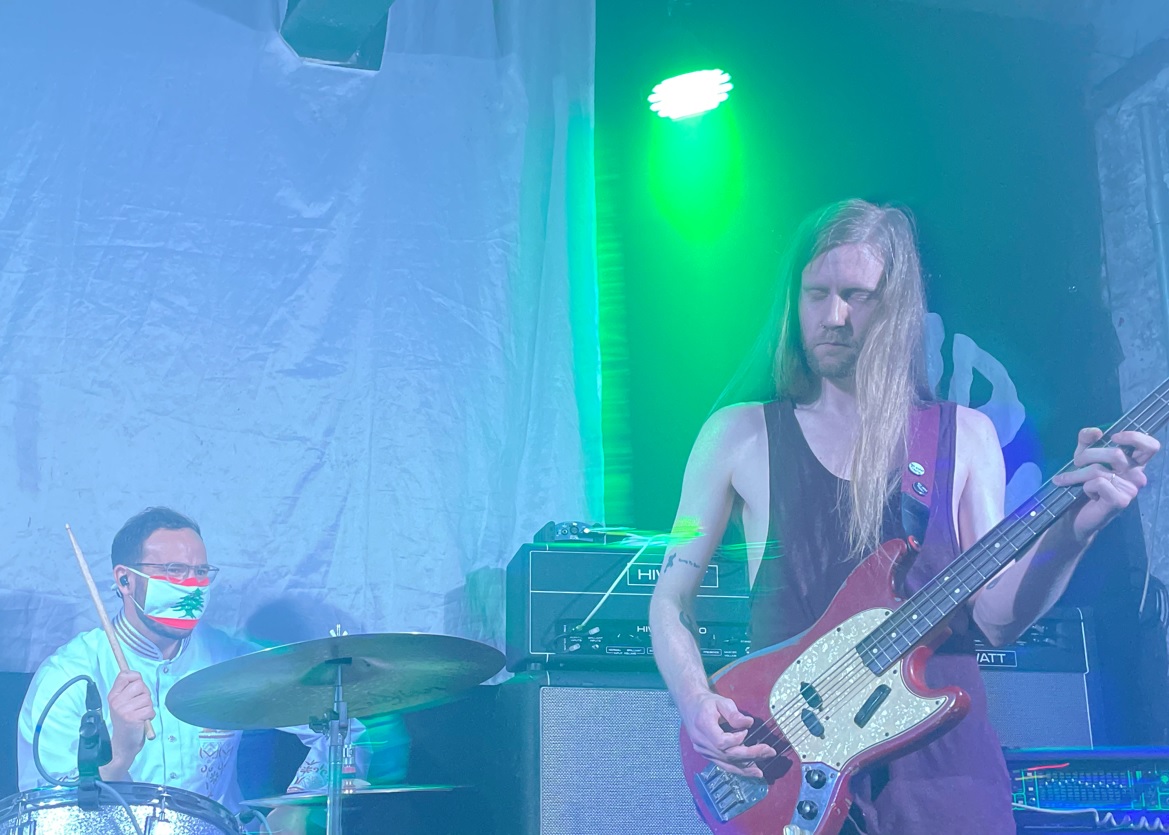 Now I must bring this up as it made the show even more special. There are two other excellent bands playing Brighton tonight being the critically acclaimed ‘Squid’ playing Chalk and the ever innovative ‘Crack Cloud’ at The Hope And Ruin. This may have cleared out the fair weather fans for the ones who made the choice to have a really special intimate experience.

As their six song set comes to a close they thank Acidbox and the energy from the crowd reaches a peak as beer flows through the air in a mist as the mosh opens and bodies propel themselves beaming into each other. The bass delivered by Ben is so consistent with a marching bass line complimenting the brain melting solos and wailing vocals. Finishing at around 9:15pm it was a stellar performance.

I recommend giving their debut album ‘Electric Dream Demon’ a listen through the link below: 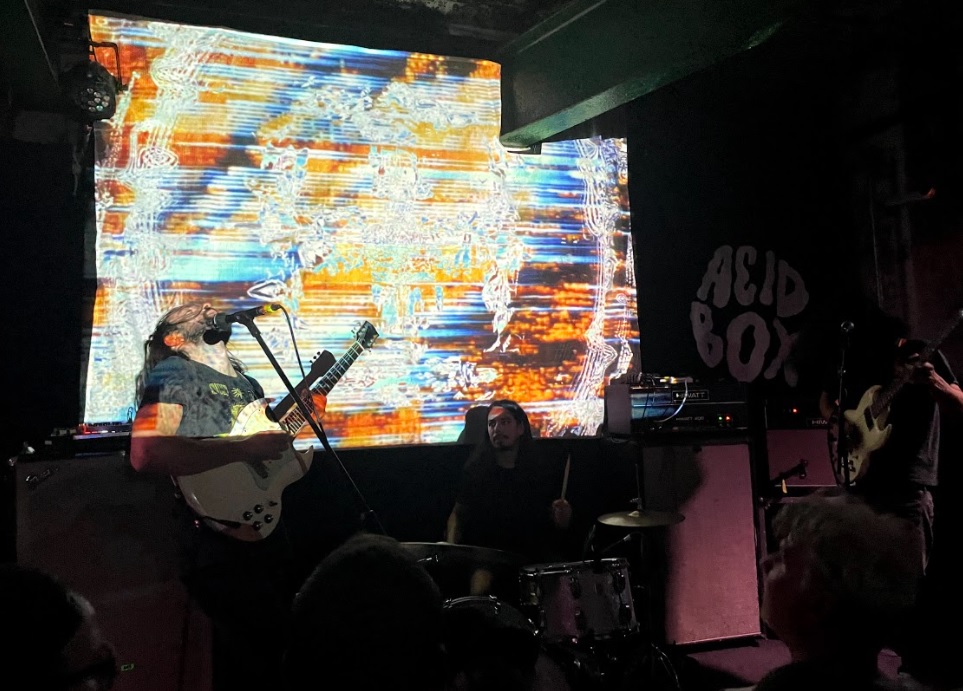 The Main event, SLIFT, the Toulouse, France-based heavy space rock trio take to the stage at 9:30. Composed of Canek Flores, Jean Fossat, Rémi Fossat and formed in 2017, this is their first time in the city of Brighton and Hove.

The groups latest album ‘Ummon’ was released on 28th February 2020 to positive critical review and has had an ever growing following since an appearance on KEXP’s YouTube channel with a video of their set racking up over 1 million views showing all of the bands strengths in their sound. As well as this, they were featured within a Levitation Session on 27th May 2021 in which the triad played in La Boule at CEMES-CNRS laboratory, Toulouse, France. Levitation have also featured the incredible Oh Sees and Ty Segall leading spectacular live performances and recordings.

On ‘Ummon’, SLIFT delivers an incredibly detailed, intense and larger than life, heavy psychedelic space rock gem. It’s an album where I don’t think words can do it much justice, you just have to listen to it yourself and get lost in its many intricacies, soundscapes and movements which fill up the 72 minute run time of the album and make it genuinely feel like it’s half that length. 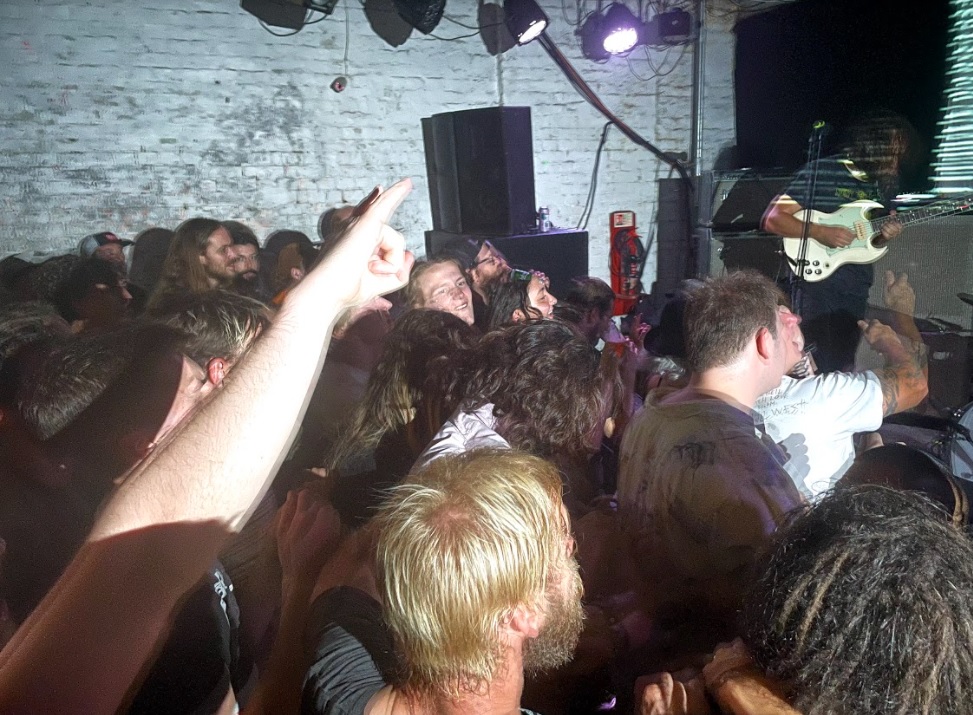 Fans during the SLIFT set at the Green Door Store 7.9.21 (pic Josh Tubb) (click on pic to enlarge!)

The set starts off with the title track of the latest album ‘Ummon’ with projected visuals and warbling sounds turning the screw into the six minute ecstasy of noise resonating around the compact Green Door Store as energy breaks through the crowd and movement explodes. The visual aspect of this performance is a real highlight with synched up glitch imagery blasting the crowd with colour and shapes which compliment the soaring sounds.

The sheer amount of sound made by just the three instruments is mind blowing as the three piece ride from song to song. The heat and energy is ever increasing but the band’s more melodic garage rock roots show up in the vocals on ‘Hyperion’. ‘Altitude Lake’ is the rare example of a song starting off slow, rather than bursting out of the gates, only to pump the brakes midway through. That’s not to call it an idyll, though, as SLIFT’S signature walls of distortion do of course show up.

I was a little disappointed they didn’t play ‘Dominator’ from their 2017 album ‘Space Is The Key’, but was quickly forgiven by how good of a time I was having. 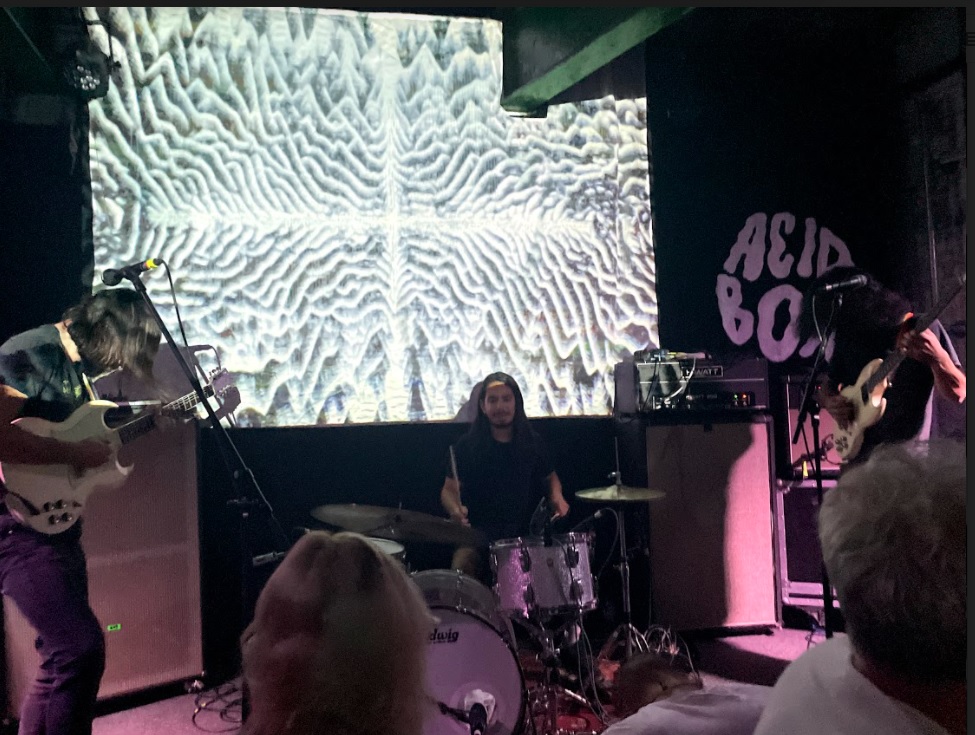 SLIFT end on ‘Lions, Tigers And Bears’, a 13-minute monster. Slift’s noise influences are apparent in its opening minutes, with the guitar often devolving into a screeching squall of distortion. The verses draw heavy influence from punk and sludge metal, but much of the riffing is technical and melodic. The band’s penchant for repetition is most clearly displayed here.

They of course thank Acidbox for putting on such a good show and leave the stage to thunderous applause and screams from the thankful crowd of very happy fans who have just witnessed one of the best up and coming psych bands in the genre at the moment.

Slift have harnessed the menace of doom metal, the energy of garage rock, the hypnotic repetition of krautrock, and the general strangeness of prog. They put those elements together in an impressive and intense package which was a delight for the small crowd at the Green Door Store as we all go home sweaty and bruised but beaming into the warm summer evening air

If you haven’t heard these guys your really must and you can find the link below: 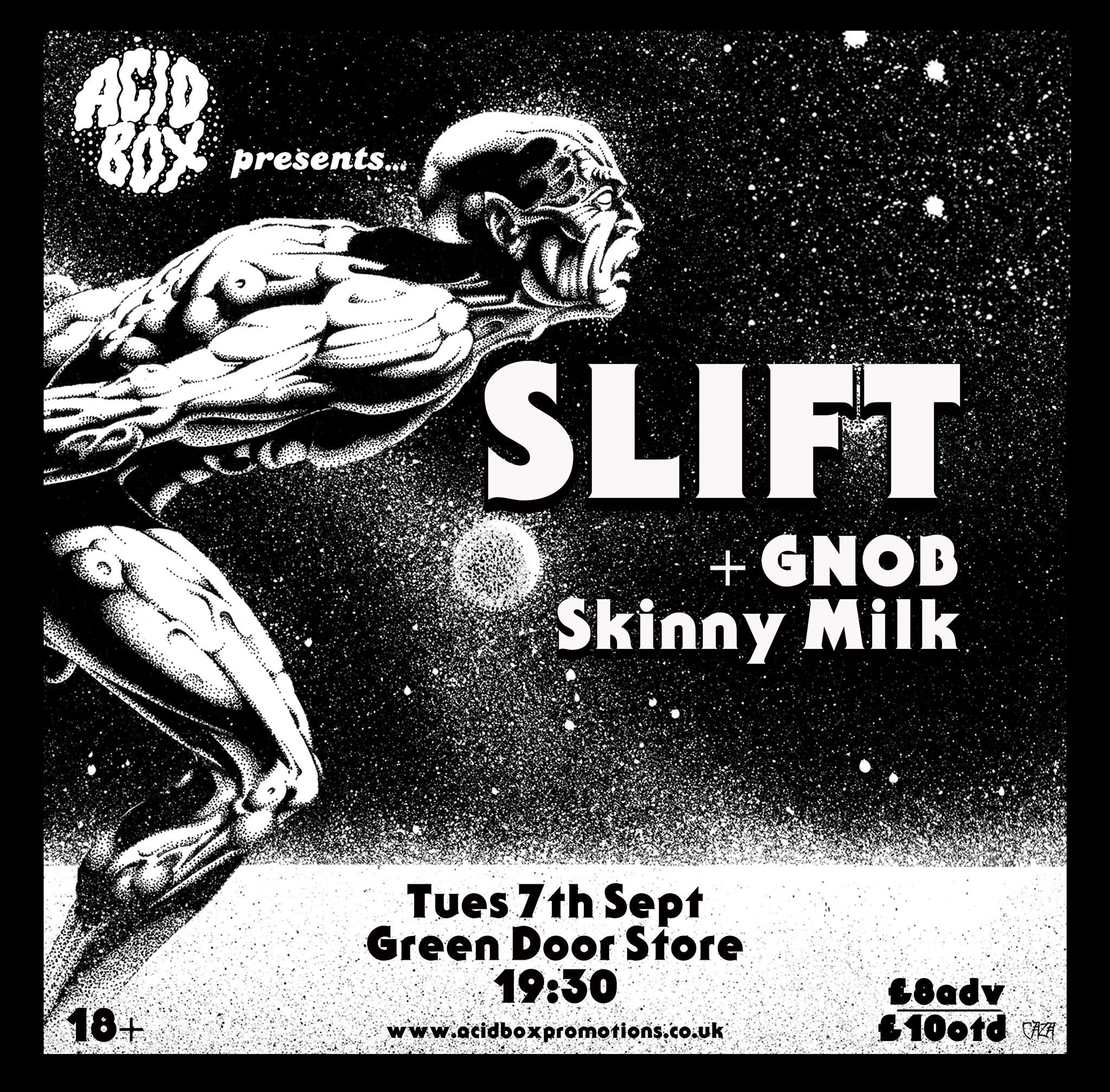 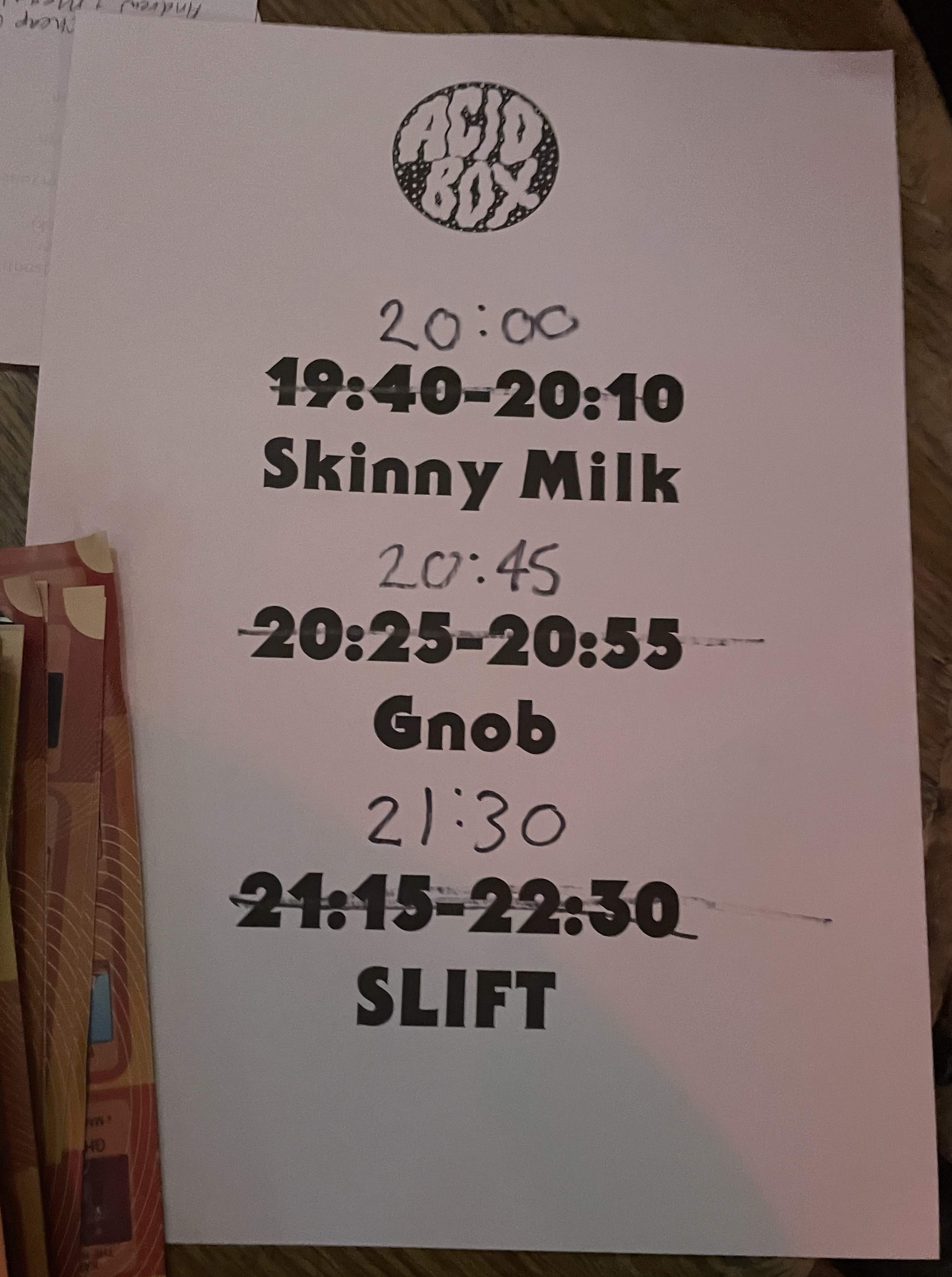 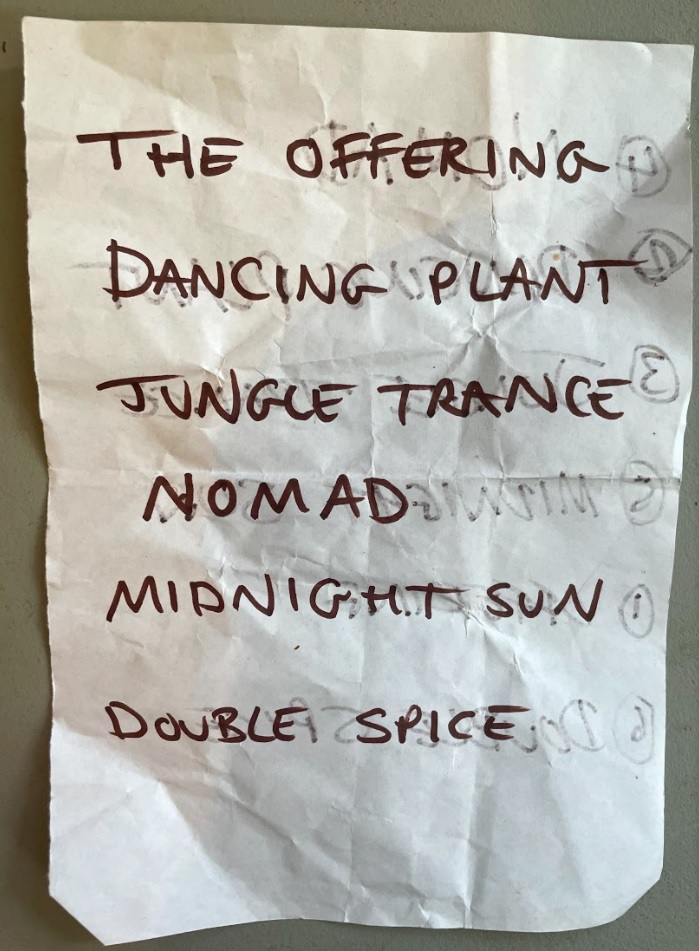 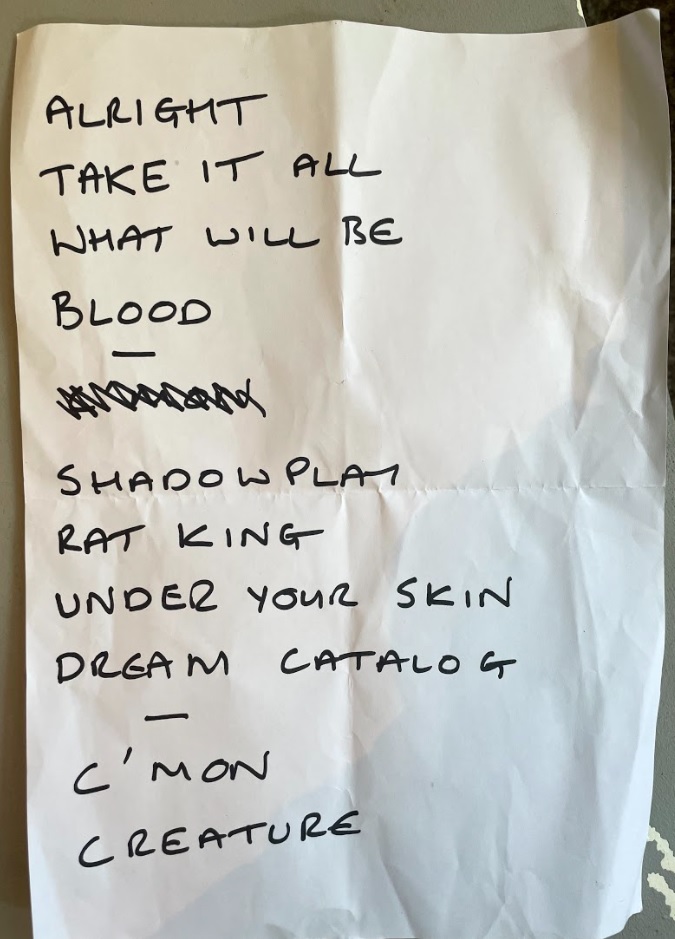