And finally, one of the longest-serving presenters on television is to retire at Christmas as Fred Dineneage prepares to bow out. 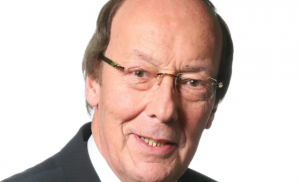 Mr Dinenage, 79, will step down as the main news anchor on ITV Meridian, having spent more than 50 years on the small screen.

The Meridian Tonight presenter said: “After almost 38 years co-presenting the ITV six o’clock show in the south and south east, I’ve finally decided to hang up my microphone.

“It’s been a really tough decision but I now want to spend a few years with my wife, Beverley, and our three dogs ‘smelling the roses’ in my garden and spending time in the mountains of Austria.

“I will be continuing with my crime programmes and ITV’s How? and writing books, including one recently commissioned. But now I feel it is the right time to move on.

“I will miss my dear co-presenter, Sangeeta (Bhabra), and my colleagues at ITV Meridian terribly.

“And, of course, I will miss our wonderful viewers who’ve given me such incredible love and support for so long.

“I’ve been so lucky in my life and career – 58 years working non-stop on regional and network programmes with ITV and I’ve been blessed by having a truly special family.

Mr Dinenage has presented regional programmes made by Southern Television and its successor TVS, as well as the current ITV franchise holder Meridian. His programmes gave included Tell the Truth and Coast to Coast.

In the 1970s he covered regional sport for Yorkshire Television and went on to host the network ITV Saturday afternoon show World of Sport, a role that saw him cover two Olympic Games.

Mr Dinenage became a household name on the children’s television programme How? and only last year appeared in every episode of a new series of the show, made for CITV.

He has anchored the 6pm flagship regional news programme across the south of England since 1983 working with presenters such as Fern Britton, Debbie Thrower and Natasha Kaplinsky.

For the past 12 years he has co-hosted ITV News Meridian with Sangeeta Bhabra, describing her as “the most marvellous person to work with”.

And she said: “Fred has been the best teacher and co-presenter. I always knew this day would come and though I’m really happy that Fred will be spending more time with his family and doing the things he loves, I will miss him massively along with the Meridian team and our viewers.”

Mr Dinenage has won Royal Television Society awards for many of the news programmes that he has worked on and in 2010 he was made an MBE for services to broadcasting.

Among the stories that he has covered were the murder of Sarah Payne, the Salisbury Novichok poisonings and the 75th anniversary of D-Day.

And he has interviewed big names in politics, entertainment and sport, from Tony Blair to Dame Vera Lynn to the Beatles.

The director of ITV news and current affairs Michael Jermey said: “Fred has had one of the most remarkable television careers of anyone in the history of the medium.

“A familiar and very popular presence on our screens for well over 50 years he has outlasted almost all his peers.

“There are viewers, who as children, enjoyed watching Fred present How? in the 1960s, who are now themselves retired.

“Many generations of ITV viewers in the south of England have welcomed Fred into their homes every evening as the presenter of the local ITV regional news.

He’ll be greatly missed on the nightly programme. We won’t now see him on TV every day but we will look forward to the occasional appearances that Fred intends to continue to make.

“Fred has been a marvellous friend to so many people at ITV down the years. We wish him all the very best for the future.”

The editor of ITV regional news Guy Phillips said: “Fred has always brought absolute dedication, warmth and first class journalism to our flagship 6pm programmes making it the award-winning success it is.

“He has been a fantastic colleague and friend to me over many years and a wonderful support and inspiration to countless people. I will miss him enormously and wish him well as he spends more time relaxing with his family.”

ITV Meridian’s head of news Alison Nice has worked with Mr Dinenage for the past 16 years.

She said: “Fred is an absolute professional who is loved by those who watch our programme and his colleagues.

“Fred is the same person off screen as he is on. He is warm and caring and has time for everyone in the team. Fred is a brilliant journalist and presenter and we will all miss him very much.”

Mr Dinenage will leave in December to spend more time with his family and to work on other projects.