Fire crews put out a blaze on the third floor of an historic 19th century house in Brighton last night (Sunday 16 January). 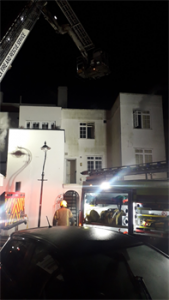 They were called to the property in Lewes Crescent, in Kemp Town, just after 6pm.

This morning, East Sussex Fire and Rescue Service said: “At 6.13pm yesterday, we were called to attend a fire at a residential property in Lewes Crescent, Brighton.

“Firefighters used eight breathing apparatus, two hose reel jets and one main jet to extinguish the fire which emanated from the third floor of the building.

“All residents had evacuated the building and no injuries were reported.

“A fire investigation took place and a faulty gas appliance was deemed to have been the cause.

“Crews remained on scene cutting away and ensuring that the building was safe.

“An inspection of the property took place this morning and the incident has now been handed over to the owner of the building.”

The houses in Lewes Crescent were built in the 1820s during the reign of George IV who was previously the Prince Regent.