More than 1,000 Brighton and Hove drivers switch to electric cars

The number of drivers to switch to electric cars in Brighton and Hove rose to 1,035 as of September – a 57 per cent increase on the total of 851 a year earlier.

A further 297 electric cares were registered to companies in the city, making a total 1,332, according to the Department for Transport (DfT).

The RAC said that the rise proved that an “electric revolution” was under way across the country.

But the Green Party said that more needed to be done to ensure a switch to electric motoring was sustainable in the long term.

Of the ULEVs (ultra-low-emission vehicles) registered in Brighton and Hove as of September, 792 were battery powered – defined as zero emission.

A further 484 were plug-in hybrid electric models, which combine an electric motor with a petrol or diesel engine.

The government said that the statistics showed that drivers were increasingly confident in switching to electric vehicles, adding: “We look forward to seeing this trend continue as we work towards the UK’s ambitious net-zero targets.”

And, the government said, £2.5 billion had been committed to accelerate the take up of zero-emission vehicles and charging infrastructure across Britain.

In 2021, the total number of public charging points increased by a third.

The DfT figures showed that 83,000 ULEVs made up 15 per cent of all new registrations nationally from July to September last year.

Registrations of petrol and diesel cars fell 41 per cent and 66 per cent respectively in the same quarter.

Designed to emit less than 75g of carbon dioxide from the tailpipe for every kilometre travelled, they include battery electric, plug-in hybrid electric and fuel cell electric vehicles.

The sharp year-on-year rise in ULEVs, which included a record 48,000 registrations in September alone, came despite an overall drop in new car registrations nationally. 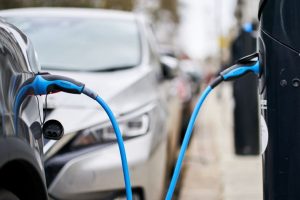 Simon Williams, from the RAC, said that the figures were proof of an “electric revolution”, accelerating electric vehicles towards becoming more mainstream.

He said that a wider choice of vehicles, longer travel ranges and fewer fears about having to recharge mid-journey meant that more drivers were becoming more willing to take the “zero-emission plunge”.

Mr Williams added: “If petrol and diesel prices continue to stay at near record levels those who can afford to will be increasingly tempted to go electric.”

The government has committed to ending the sale of new petrol and diesel cars and vans by 2030, and ensuring that all new sales are “zero emissions at the tailpipe” by 2035.

But Caroline Russell, the Green Party’s spokeswoman for transport and healthy streets, said that the government and councils must do more to provide a better network of charging points to ensure switching to electric vehicles is viable and efficient.

She added that it would be a mistake to rely on electric vehicles to resolve the climate and air pollution crisis, saying: “It doesn’t matter how cars are powered. They still contribute to traffic deaths, congestion and dangerous air pollution from tyre wear.”