A new kebab restaurant has been granted a drinks licence despite opposition from neighbours. 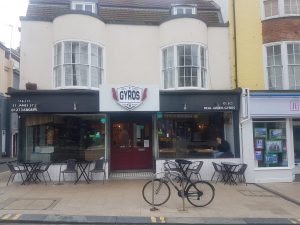 Real Greek Gyros, in St James’s Street, Brighton, can sell alcohol from noon to 11.30pm from Monday to Saturday and from noon to 10.30pm on Sundays.

The business, owned by Karwan Abba, opened on the corner of St James’s Street and Charles Street in December after two takeaways merged – Mac Doner and Café Bean.

Mac Doner had a late-night food licence until midnight and an amendment to the existing licence allowed the operation to extend across the whole premises.

The new licence restricts alcohol sales to customers sitting and eating inside the restaurant, complying with Brighton and Hove City Council’s licensing policy for the area.

The panel said: “We considered the applicant’s detailed operating schedule and noted that the proposed conditions were consistent with a restaurant.

The councillors were concerned about potential noise from the rear patio which was raised by neighbour Stuart Martin, of Charles Street.

To counter potential problems, they restricted the patio area to no more than four customers at any time and ordered it close and be cleared of tables and chairs by 9pm.