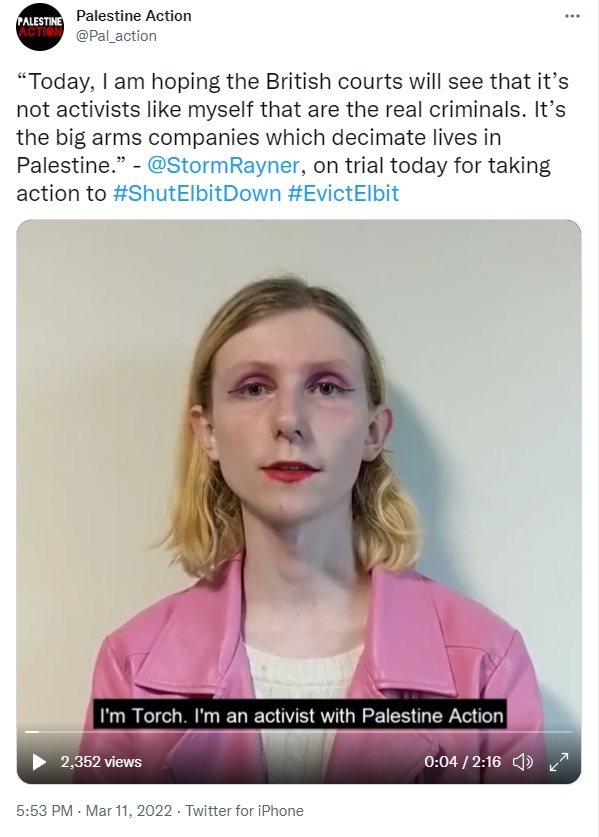 Bliss Winters, aka Charlie Turner, talks about their activism in a Palestine Action Twitter video

A Palestine protester who daubed red paint on Brighton offices has been found guilty of criminal damage.

Bliss Winters, who gave the name Charlie Turner in court, was given a conditional discharge and ordered to pay a £22 victim surcharge – but no court costs or compensation.

During his trial earlier this month, the court heard the sociology student was caught by police with red paint on their hands after they sprayed anti-Israel slogans on Sovereign House in Church Street last December.

The building was chosen because its managing agents Jones Lang Lascelle also manage a building in which Israeli-owned drone manufacturer Elbit has offices in London.

There is no direct link between Sovereign House and Elbit, or Israel.

Winters was charged with criminal damage and pleaded not guilty. At their trial, they said they had been acting in the hope it would help stop Israeli attacks on Palestine.

Giving her judgement today, district judge Amanda Kelly said she found Winters to be a compelling witness when he said he genuinely believed he was assisting the people of Palestine.

But she said this while this meant their human rights were engaged under Article 10 of the European Convention of Human Rights, it was not enough of a defence.

She said: “I find that his right to freedom of expression is outweighed by the need to protect the rights and freedoms of others and prevent disorder and crime.

“Although not permanent, the damage was certainly not trivial. It took two attempts by a professional cleaning team to remove the paint and considerable expense.

“It also caused significant inconvenience to those who had to set about removing it in the hours that followed.

“The victims in this case are private enterprises. It simply cannot be right that in a democratic society, any person who has strong beliefs about a particular issue can damage the property of someone else with immunity.

“To hold otherwise would be to reject one of the foundations of a democratic society.

“I also consider it relevant there were many other ways that the defendant could have sought to express himself without causing criminal damage, particularly as I heard in evidence that he is an artist.

“For example, he could have erected some sort of banner, or poster, or flag or such like, or organised a traditional-style demonstration.

“Without seeking to stifle healthy debate and expression, there is a strong public interest in deterring people from exercising their Article 10 rights in a way that results in damage to other people’s property.”

Winters, 19, is a member of Palestine Action, who protested outside court both before their trial and before today’s hearing.