A crazy golf venue on Brighton seafront has been granted a licence to serve cocktails on its new roof terrace.

The licence application for the venue, in Madeira Drive, went before a Brighton and Hove City Council licensing panel, made up of three councillors.

The panel approved Jungle Rumble’s licence and even allowed the sale of alcoholic drinks beyond the beer, cider and wines already available from the downstairs café.

Director Angus Wright, 54, has already had a licence for the old roof terrace and café since 2016.

When the new extension is built, the bar will be allowed to sell up to six cocktails with a maximum alcohol measure of 25ml, in single servings, not jugs.

Customers will also have to be seated when drinking, with standing at the bar not permitted.

At the licensing panel hearing on Thursday 21 April, Jungle Rumble’s solicitor Jonathan Smith, of Poppleston Allen, suggested that the sale of alcohol would be “ancillary” to the complex being an adventure golf course. He added that the Brighton Zipwire bar had suggested a similar condition.

The licensing panel – Green councillors Lizzie Deane, Marianna Ebel and Alex Phillips – decided that alcohol sales should account for no more than 20 per cent of the venue’s income.

They said: “The panel is concerned to ensure that the café remains ancillary to the adventure golf course and welcomes the applicant’s agreement to such a condition.

“Given that the business’s current income derived from the sale of soft drinks and alcohol is 15 per cent, we consider 20 per cent is more than reasonable.”

Sussex Police were concerned that the focus of the venue was shifting from a café-style set up to a “beach bar” operation.

The force said that while the venue had a licence for beer, cider and wine, it did not want to see strong spirits on sale.

But the licensing panel hearing was told that there was no evidence of disorder linked to Jungle Rumble. 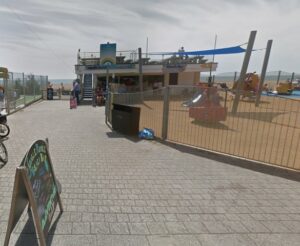 The drinks licence for the new roof terrace will have the same operating hours as the existing café, from 11am to 10pm daily.