A woman who was raped has praised a Brighton charity for the support that she has been given.

She praised Survivors Network, which supports survivors of sexual violence and abuse, and described senior adviser Julia Gray as a tower of strength.

Her praise for the Brighton charity followed the jailing of Glen Noone for seven years by a judge at Chichester Crown Court.

The woman, who cannot be named for legal reasons, was raped at her home in Lewes in what police described as “a vicious and opportunistic attack”.

She said: “This was an attack by a man who I trusted and who betrayed that trust in the most terrible way.

“But I was determined that he would be held to account for what he had done.”

“I am very grateful to Detective Constable Jo Barber and the Sussex Police Sexual Offences Investigation Team, PC Jo Fox and to my adviser Julia Gray, from the specialist Brighton-based sexual offence support agency Survivors Network, who were towers of strength throughout and supported me during the entire process.”

Noone, 33, of Lammas Close, Littlehampton, was jailed on Wednesday 11 May, having been found guilty of raping the woman in October 2019.

As well as being jailed, Noone will be a registered sex offender for life.

The prosecution, authorised by the Crown Prosecution Service (CPS), followed an investigation by detectives from the East Sussex Safeguarding Investigations Unit.

Detective Constable Barber said: “Noone forced himself on his victim in her own home in a vicious and opportunistic attack.

“She has shown incredible bravery and patience in supporting our investigation throughout.

“Her evidence in court was key in securing this conviction and with her support we have been able to bring him to justice.

“When Noone is released he will be under strict conditions and will be monitored by police and the probation service.

“It is important that anyone who has been affected by this type of offence understands that we are here to support them and we will always seek justice wherever possible.” 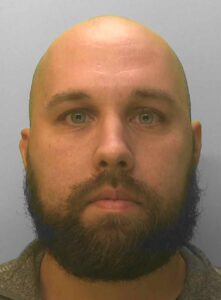 Judge Rennie told Noone: “You have been convicted on the clearest evidence of rape and your brutish actions have had a profound effect.

“Your victim did nothing absolutely nothing wrong and in no way was any of what you did her fault.

“You carry sole responsibility. You were determined to get drunk and determined to have sex with anyone that night. The victim trusted you and allowed you into her home.

“You decided to have sex with her whether she consented or not and putting her through this trial was another cruel and cynical twist which compounded the harm already caused.

“This was her own home and she should have felt safe at all times.”

For information about reporting sexual offences and the support that is available, see the Sussex Police website.