All change at St Peter’s, the city’s ‘Cathedral’

Brighton’s St Peter’s Church stands proud in the city, still surrounded by scaffolding, but with the newly restored tower gleaming in the sun. It is a very successful church, packed on a Sunday and a hive of activity at other times.

Hard to believe that, just 14 years ago, it was threatened by closure, its congregation actively encouraged to leave. My daughter and I were active in the campaign to save the church. It was one of the hardest, most inspiring campaigns I have ever experienced.

I had been a borough councillor in the politically turbulent 1980s. Like most politicians I had experienced political pressure and manoeuvring, but nothing had prepared me for a campaign against the settled will of Church of England clergy. It was brutal, but our small band, mostly comprised of elderly women, eventually prevailed.

We refused to give in, in the face of misleading “expert” opinion, when we were repeatedly told our cause was hopeless. We used every means we had of argument and formal appeal to the diocese and eventually the Church Commissioners.

When the church was closed on grounds of “safety”, we asked for services in the church hall. When even that stopped, we met on Saturdays in Bardsley’s fish and chip shop and for Matins at St Bartholomew’s Church. We refused to disband. We called ourselves the Friends of St Peter’s.

We knew formal objection could never be enough in the face of institutional might, and so we turned to the people. We petitioned, gathering signatures in shops and churches, in the Open Market and the streets surrounding the church. Staff from the Co-op food store gathered hundreds of signatures from customers. A group of rubbish collectors petitioned at their depot. In all, seven thousand local people signed.

We found proof of what we had always known, that in this supposedly godless city, the church was important to people far beyond the congregation. They might, in some cases have had little time for formal services, but loved the church.

Several told us they went into the open church “to sit and think”. Many had been baptised, married or attended their parents’ funerals there. Some knew the Church Hall had been built as a war memorial and spoke of great grandfathers who had died in the trenches.

Time and again we heard people say, “that’s our cathedral, isn’t it?” It isn’t a cathedral, but that is how it is often seen, a place to turn to in time of personal or national celebration or mourning.

Thankfully, we delayed the process of closure long enough to discover, in the nick of time, that a London church, Holy Trinity Brompton (HTB) had offered to help. They had written to the diocese, but receiving no response, contacted us. We visited HTB, spoke to the vicar Nicky Gumbel, and decided this was the miracle we had been hoping for.

Our small group, ranging in age from the teens to the mid eighties, travelled to London to appeal in person to the Church Commissioners, carrying our banners and posters.

We faced the combined opposition and evidence of our own clergy, and the former bishop and archdeacon, but, armed with our petition and the knowledge that HTB could help, we prevailed. We even had the comfort of hearing a bishop on the panel gently but firmly rebuke a senior clergyman for being rude to us.

In 2009, Archie and Sam Coates from HTB, together with Nicky Gumbel’s son, Jonny Gumbel, led a section of their established congregation down to Brighton, and together they re-opened the church – with a specific brief from the now supportive diocese, to focus on young people. 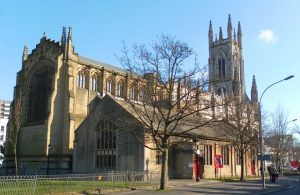 Since then, great efforts have been made to repair the beautiful building and the church has gone from strength to strength. It remains, as it has always been, part of the Church of England.

Nicky Gumbel is soon to retire as vicar of HTB and, in August, Archie Coates will leave Brighton to take his place in London. Archie’s and Sam’s inspirational presence will be very much missed in Brighton, but the work will go on under the leadership of the Reverend Dan Millest, currently associate vicar of Holy Trinity church in Kuala Lumpur. He will start at St Peter’s in September.

Our community is indebted to Archie and Sam Coates and they will be a hard act to follow. However, I am confident that the people of Brighton, who saved St Peter’s and love it still, will welcome Dan as warmly as they did Archie when he begins service in our beautiful “cathedral”.