Sussex came into the game on the back of a five-game losing streak. They showed a keen fighting spirit to turn the tide and end Surrey’s unbeaten start to the T20 Blast in resounding fashion.

The hosts were put into bat and experimented by sending Harrison Ward to open with Mohammad Rizwan. They began steadily and took 17 off the fifth over, bowled by Moriarty, with Rizwan being the chief aggressor.

Ward found mid-off the next over as the hosts ended the powerplay at 46-1.

Ali Orr kept the scoring rate high, quickly getting into the act with a six to the leg-side. Rizwan treated the Hove crowd to his immaculate shot selection and stroke play, with an extra-cover drive off Conor McKerr’s bowling the pick of the lot.

Chris Jordan and Sunil Narine pulled the scoring rate back with some good bowling. Ali Orr was caught behind for an impressive 30 from 19 balls.

Rizwan was run out, slipping halfway down the pitch and succumbing to a stroke-filled 48 after Jordan’s direct hit.

Jordan and Narine bowled well in combination. Tom Alsop failed to get going and was bowled round his legs after he left leg-stump exposed to Atkinson.

Ravi Bopara struggled with the bat, managing a scrappy seven from 14 balls and mistimed a scoop to Atkinson at short fine-leg. With four overs left to go, Sussex were 113-5 and needed a strong finish.

And that was exactly what Delray Rawlins and George Garton delivered, as the final four overs went for a mammoth 59 runs.

Worrall’s plan of going full and wide played to Rawlins’s strengths as the 24-year-old Bermuda-born southpaw targeted some big offside gaps and Worrall went for 18 runs.

Jordan began the final over with a slower bumper which was thwacked for six over cow-corner by Garton. Incidentally both Garton (24) and Rawlins (34) finished with a strike-rate of 200 as the Sussex Sharks managed a competitive total of 172-5.

Surrey’s run chase got off to a flier, as Garton failed to zero in on a proper length and conceded four boundaries.

Jacks showed his affinity to the off-side, timing a cut off Rashid Khan for four and punishing Rawlins for two boundaries and a six over extra cover. 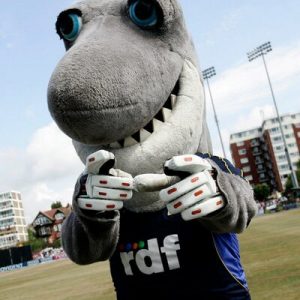 Smith got into the act with some clean striking, including a straight six off Finn, but the bowler had the last laugh as Smith mistimed to a gleeful Rashid Khan at covers.

Nico Reifer departed for a duck, dismissed by Henry Crocombe. Laurie Evans and Jacks stitched a flowing partnership of 57 in 5.3 overs. The duo used their feet to get to the length of the ball and ran well between the wickets, as even a host of good deliveries ended up as boundaries.

The stands, sensing further frustration, broke into a chorus of “Sussex get battered everywhere they go”.

Rawlins was costly once again, leaking two sixes off Evans who went big over deep mid-wicket and long-on.

Evans fell to Tymal Mills, finding the safe hands of Ward at long-off and Sunil Narine lasted all of two balls, slog-sweeping the first for six before being castled by Khan.

After 12 overs, Surrey were coasting to victory, needing 51 to win from 48. Burns fell cheaply after excellent work behind the stumps by Rizwan while Will Jacks was ticking along nicely.

The run chase fell apart when Rawlins had Jacks caught behind for an excellent 76 off 48 balls and Jordan was run out by his opposite number for five.

The Jaws theme tune rose in decibels after each falling wicket and the crowd got into the act, heaping the pressure on the once invincible Surrey.

The last wicket pairing of Moriarty and Worrall survived Khan’s final over, with Moriarty’s boundary reducing the equation to 18 in 12.

But Bopara’s bullet throw caught Moriarty short off his crease and the bails fell nimbly. The crowd let out a raucous roar. Sussex had completed a magnificent turnaround, beating Surrey by 17 runs.

Streaks were severed in a night of unexpected twists, collapses and surprises. Having already qualified for Finals Day, Surrey can test their bench in another away fixture against Essex tomorrow (24 June). The Sharks travel to Canterbury tomorrow to take on basement side Kent.