The father of a disabled young man is concerned that many people who need respite support for their loved ones miss out because places are taken up by those needing long-term care.

Mrs McGill, the mother of an autistic teenage boy with learning disabilities, was unable to not get respite care for her son during a family emergency.

Beach House is the home in Brighton and Hove offering respite care for over 18s.

And Mr Man, from Portslade, said that because people were living there long term, only two or three beds were available for overnight respite for the 50 or more families needing the service.

Mr Man and his partner used to have respite for five nights a month respite before the coronavirus pandemic when it was cancelled because of the lockdown and covid-related restrictions.

Brighton and Hove City Council has since reassessed their needs and the family has respite again.

He said: “We can’t cope without our overnight respite, after several months, including lockdown.

“There was no plan, no discussions. There was no communication or updates. It was dreadful.

“Even pre-covid, the situation was the same as it is now, with people living there and blocking the beds.

“We are now getting our respite after the difficulties and we’re very happy that our assessed needs are now being met.”

Mr Man said that he did not blame those who were stuck at the care home, in Westbourne Villas, because there was nowhere else locally for many of them to go.

He said: “The council needs to find somewhere for them – supported housing. If they’re moved into those places, the beds are freed for the intended purpose.

“The people living there, it’s not their fault. Some have been offered places outside the area and they’re not compelled to take them.

“Beach House has become a dumping ground for people who need residential homes and supported housing but can’t find it anywhere. There need to be more respite beds available to meet the needs of the people who need it. 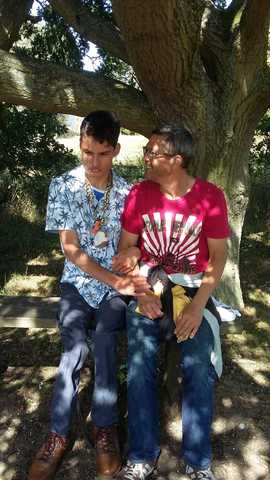 Neil Man and his son

“There are 50 people who get support from Beach House and they are just the ones who’ve been assessed. There are dozens of people who can’t even get a care needs assessment to get respite.

“Someone at the council said that no one is complaining about the lack of respite and I just laughed because I know people aren’t getting the assessments. Their needs aren’t being met.

“People don’t make complaints because they’re exhausted. They worry about things being taken away. The council wouldn’t do that but it doesn’t stop the fear of rocking the boat.”

The challenge of care places for long-term residents is also affecting the council’s budget.

A recent report to the council’s Policy and Resources Committee forecast a £217,000 overspend in the current financial year related to long-term placement of adults with learning disabilities at Beach House.

The report also said that high levels of staff absence and the cost of emergency placements at Beach House were adding to the financial pressures.

Labour councillor John Allcock, the joint leader of the opposition, raised concerns that the council was projecting an overspend on residential respite care because of the cost of emergency placements.

The council’s adult social care chief Deb Austin said that there was a lack of alternative placements and her staff were “trying to be creative” in dealing with the problem.

Staffing was also a factor, she said, adding: “We are really struggling there in terms of workforce shortages, getting people in.

“That’s related to the cost of living crisis and, until very recently, we haven’t been that competitive. I’m hoping the agreement around pay grades will have a positive impact on that.”

“The emergency placements are particularly important for our older carers. This is because they themselves sometimes have health issues that can disrupt their ability to act as carers for weeks or sometimes months at a time.

“This inevitably means emergency placements can last for quite long periods of time. But it means we can give them the assurance they need that their son or daughter will be supported in a familiar environment while the carers fully recover their health.

“Nationally, social care services are finding it more and more difficult to meet the demands being placed on them.

“Long-term reductions in funding from central government and difficulties in recruiting staff are key issues. Brighton and Hove is no exception to this situation.

“However, Beach House continues to meet all existing planned respite arrangements for people and their families as well as taking new referrals for planned respite.”