A Brighton schoolgirl is fearing the worst this afternoon as a decision is made on ambitious plans to transform the old fruit and vegetable market on Circus Street. 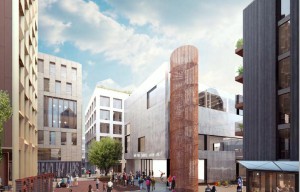 Developers Cathedral have applied for permission to tear down the market and replace it with several multi-storey buildings housing a University of Brighton library, dance studio, offices and student accommodation, as well as retail and restaurant space.

Today at 2pm, Brighton and Hove City Council’s planning committee will consider officers’ recommendations that the plans be approved.

But at least one resident, Tabitha Nixon, is keeping her fingers crossed they will say no.

Tabitha has already written a letter of objection to the plans, as well as a letter to the Argus in March.

This week, she said: “Since I am a nine-year-old girl, there is nothing I can really do about it. But if I could do something, I would, because soon this world is just going to be a big futuristic mess.”