Councillors have been briefed about a hugely ambitious blueprint to transform the seafront from the Brighton Centre to Black Rock. 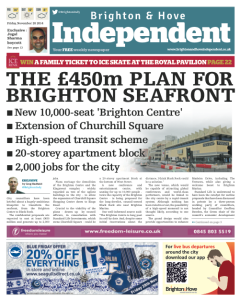 The confidential proposals are expected to cost at least £450 million and generate up to 2,000 jobs, according to the Brighton and Hove Independent newspaper tomorrow (Friday 28 November).

Plans envisage the demolition of the Brighton Centre and the Kingswest complex – widely regarded as two of the ugliest buildings in the city – to allow the expansion of Churchill Square Shopping Centre down to King’s Road.

Crucial to the viability of the plans – drawn up by council officers in consultation with Standard Life Investments which owns Churchill Square – could be a 20-storey apartment block at the bottom of West Street.

A new conference and entertainment centre, with seating for up to 10,000 people – twice the capacity of the Brighton Centre – is being proposed for the long-derelict, council-owned Black Rock site near Brighton Marina.