Dozens protest outside Brighton bank over arms for Israel 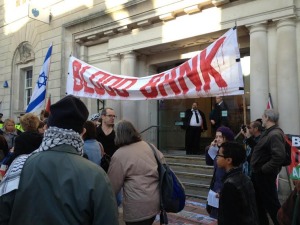 They were campaigning against the bank’s investment in drone maker Elbit Systems after hundreds of deaths in Gaza from drone strikes in the summer.

The demonstrators draped a banner across the front of the bank and handed out leaflets on both sides of North Street.

Sussex Police said that the protest passed off peacefully.

The Brighton and Hove Palestine Soldarity Campaign said on its website before the demo: “In Brighton we will be joining the UK-wide Stop Arming Israel day of action to pressure the UK government and British companies to end all relationships with Israeli arms companies and to end all forms of military cooperation with Israel.

“We know of around 30 other groups around the country who will be joining the day of action.

“During July and August 2014, 2,150 Palestinians were killed as Israel carried out another massacre in the besieged Gaza strip.

“There was no safe place for the 1.7 million people in Gaza to take shelter from the Israeli bombardment.

“This massacre was carried out with the support of weapons exported from the UK and by companies in which UK companies are invested.

“During the summer hundreds of thousands of people marched to demand a military embargo on Israel.

“Occupations were held at the offices of UK government departments and companies with links to the arms trade.

“These grassroots actions contributed to the UK government announcing that it was considering suspending 12 licences for arms exports to Israel.

“Yet the UK government has so far failed to take any action to curb the arms trade with Israel and many UK companies continue to support and profit from Israeli militarism.

“Join us in a UK-wide day of action to keep the pressure on the UK government and to expose the complicity of the companies that help Israel to commit its massacres.”