New figures show there have been no fatal collisions where Brighton and Hove’s first 20mph zones were introduced since they began in 2013. 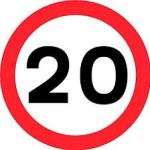 The data, published in a report to today’s environment, transport and sustainability committee, shows all types of collisions and casualties are down in the first zone since it was created in April 2013.

Data for the second phase, introduced last June, is still being analysed, but the report says early indications are that speeds have reduced.

All Collisions in first 20pmh zone by severity

All casualties in first 20mph zone

As well as updating councillors on the progress of the first two 20mph zones, the report also asks them to approve the next step in the consultation for the third zone – the advertising of speed orders.

The first zone extends from Sackville Road in the west to Freshfield Road in the east and north as far as Old Shoreham Road.

The second covers much of the suburbs, from Portslade in the west to Moulsecoomb and Whitehawk in the east and Patcham in the north.