Recently found pictures of the West Pier from the mid 1990s provide a fascinating tour of the derelict structure. 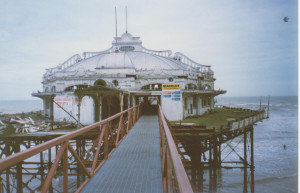 Andy Hebden took the pictures during a tour of the pier run by the West Pier Trust over the winter of ’95-96, by which time the pier was cut off from land.

Andy said: “I was at the University of Sussex in the mid ’90s and the West Pier was always just there, out at sea and it was a lovely thing to see compared to the Palace Pier.

“I noticed that they were doing tours and it was one of those places I always wanted to have a look at.

“It was winter and late afternoon, which is why the photographs are really dark and cold and grey and the sea was a bit choppy.

“When they started putting life jackets and hard hats on you really felt you were going off land.

“There was a modern bridge that went from the original base of the pier on the land and although it was structurally sound, it was very narrow and you had to go along it in single file. 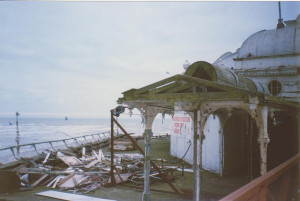 “That took you out to the first central pavilion and from that point onwards you really felt that you were somewhere special.

“Even though the central pavilion was still intact, I seem to recall this narrow modern bridge carried on through the pavilion because the floor was quite unsafe.

“Around the edge of the pier were iron seats which looked out over the sea and there were still some in place but within the central pavilion you could see all the ones they had saved – a huge stack of iron seats resting.

“Once through there, you were given some information about it and then we carried on and there was a very narrow bridge that took us along the space between the central area and the end pavilion and that was all decaying.

“Again, we had to stay within the bridge but when we got to the end bit, we were free to wander around to a certain degree. It was only common sense which stopped you wondering off too far.

“There were inches and inches of bird droppings – that struck me. I had seen the starlings’ murmurations around the pier and that gave an impression of how many had been there. It was like very unpleasant snow.

“On the floor were the remains of bingo or raffle tickets scattered around where they had been left, tiny little relics of things.

“At the end was a rather sad red light to warn ships the pier was there. It was very atmospheric and you felt that you were very fortunate to go to that place.”

After the photographs were printed, they were stored in the attic at Andy’s parents until he found them late last year.

He said: “It was frustrating that I hadn’t taken very good photographs but at the same time they’re of something which can no longer be photographed.

“There was a kind of dignity about the pier. It was always there to juxtapose with the Palace Pier, sad and slightly angry looking, sat along the beach.

“I thought they deserved to be shared. It’s something that I haven’t forgotten.”