Work is under way to restore the old Brighton rock shop which once stood as a toll booth at the entrance to the West Pier.

The work is being undertaken at the Swan Foundry, a specialist forge and metalworker in Banbury, Oxfordshire. 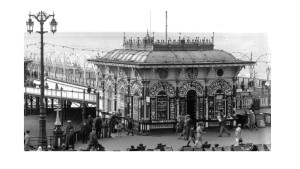 The West Pier Trust said in its latest newsletter that the rock shop stood at the eastern corner of the shore end of the pier.

The trust said: “Sadly it had to be closed and dismantled in 2010 because it had become structurally unsafe.

“Its original use was as a toll booth and another identical building stood at the western corner of the root end. They opened, with the pier, in October 1866.

“As part of the i360 scheme the eastern building will be restored and reinstated and its sister toll booth replicated.

“Work has already begun on the restoration and the dismantled toll booth is currently at Swan Foundry in Banbury where the sections of the building are already looking transformed.

“It’s an exciting prospect that the entrance to the i360 will strongly reflect the original entrance of the pier and the two principle structures will be back in place for the first time since the early 1980s.”