People living next to a building site are furious after a new five-storey block of flats started going up without anyone informing them. 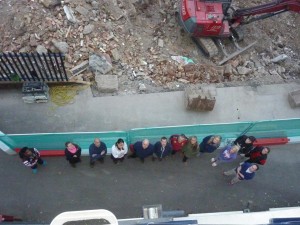 The first residents of Ebeneezer Apartments in Ivory Place knew of the development less than four metres away from their block was when the diggers started going in.

The council wrote to some neighbours of the site – but not the people living in the block right next door as its policy is not to write to individuals living in blocks with more than 15 homes.

“Our seven flats have been rendered unsaleable as all light will be blocked for the sake of four new flats.

The council granted four lots of planning permission without notifying us as neighbours of the application.

“Apparently if you live in a block of flats Brighton council don’t notify you by post.

“Their idea of notifying us was to put a sign up two streets away uphill and away from the shops, buses and the building being built.”

Another resident, tour manager Leigh Britton who lives on the second floor, said: “Our view which is currently of the area around St Peter’s Church will be a brick wall or a window 3.5 metres away, blocking all the light.

“The one bedroom flats on my side of the building only have windows facing this new building.

“The alleyway is quite narrow and we have already had huge problems with vandalism there, people breaking into the bin shed and shooting up drugs. That’s now going to be even darker so the problem will get worse. ”

A council spokesman said: “The planning applications on 12a Richmond Parade were advertised in accordance with our adopted Statement of Community Involvement by a mixture of site notices and neighbour notification.

“Where a block of flats has more than 15 units we will rely on site notices. This is normal practice.”

Mr Nelson, Ms Britton and their neighbours have now started a formal complaints process, with the intention of going to the planning ombudsman if it is not resolved.

But they are resigned to the fact that even if their complaint is successful, the building may have been built by the time it is decided.

Once an application is approved, neighbours have the option of applying for a judicial review – but there is a time limit on this.

And as work only began on this site six months and a day after the plans were approved, this is no longer an option.

When completed, the building will consist of four two-bedroom flats with office space on the ground floor.