The Holiday Inn on Brighton seafront is to get an external facelist as the final stage of a £3million revamp. 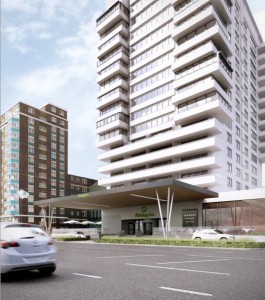 The hotel has applied for permission to cover all 17 floors of the 1960s towerblock with white render.

It has already refurbished most of the bedrooms and bathrooms which take up the first to fifth floors, and redesigned its ground floor lobby.

However, plans for a new Marco Pierre White restaurant, as suggested by the artist’s impression, are sadly not now coming to pass.

Instead, a burger and craft beer restaurant is in the pipeline.

It says: “The most significant change will be to the colour of the main façade. The existing brown tiles of the building will be meshed and covered with a white render system.

“Whilst the building will still be of the same scale and bulk, the rendering of the façade will create a more attractive and sympathetic appearance.”

It adds: “Whilst the building will remain of the same height and scale, the proposal to render the main façades will not only upgrade its appearance, but will also be consistent with Sussex Heights, a rendered high rise residential tower block which also sits within the skyline of the seafront.”