People living in a block of flats on the corner of Edward Street and Pavilion Parade are having to negotiate roadworks and railings to leave their homes. 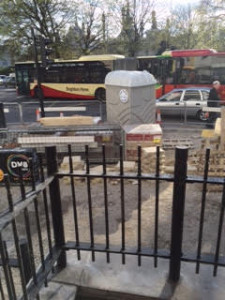 Workmen started relaying the pavement in front of the Royal View flats on Tuesday, leaving residents an obstacle course every time they come in and out.

The works are due to continue until the end of this week,

One resident, Lucy, said she had not been informed of the works, which meant she was not able to arrange her shifts at work to minimise disruption – although the council does say it wrote to people in the block.

She said: “I’m a fairly patient person and realise that the weather and other circumstances can hold up things like this.

“I also realise that buying a flat in the middle of town is going to give rise to some noise from various sources every so often. But the last few days have become ridiculous!

“I’m a nurse at the children’s hospital and the last few weeks following the times when I’ve been working through the night, coming home to sleep in the day has been pretty much impossible.

“Lord help anyone in the building who is elderly or disabled and has difficulty getting around, and parents with small children and pushchairs.

“There are so many obstacles to dodge and uneven surfaces to walk over before you’ve got through the railings on the other side of the dug up pavement, it’s a deathtrap.”

A council spokesman said: “A new pavement is being laid at the junction of Edward Street and Pavilion Parade as part of the final phase of improvements to Edward Street.

“Letters were sent to residents in Royal View flats notifying them about the work on the pavement, which is due to be completed by the end of next week at the latest.

“We apologise for any inconvenience caused by the railings and the uneven pavement surface while the work is in progress. The railings are there for safety reasons, and contractors on site are ensuring residents can come and go as they need to.”