Work to complete the revamp of a square off London Road has been delayed because of ongoing roadworks elsewhere in the city. 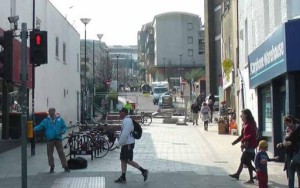 Brighton and Hove City Council started working on the square in Ann Street and Providence Place, in front of St Bartholemew’s Church, in August last year.

It was meant to have finished in December – but delays to other projects such as the seafront, Edward Street and the Vogue Gyratory have had a knock-on effect and it’s now slated to be finished in June or July.

And the final phase, the space opposite St Bartholomew’s Primary School, is on hold as rising costs mean the funding no longer covers the whole project.

A council newsletter explained: You will have noticed that completion of the works is taking longer than originally estimated.

“Unfortunately the number of road works that have been ongoing on the seafront, Edward Street and the Vogue Gyratory and various delays to these caused by a variety of factors has meant that the contractor has been severely stretched and unable to dedicate the resources to completing the Ann Street/Providence Place project within the originally scheduled timeframe.

“The works should now be completed around June or, by the very latest, July. A revised programme of works and a suggested alternative route for vehicles affected by road closures resulting from the work are provided in this newsletter.

“Rising costs has meant that the works on the upper part of Ann Street will not be completed under the current funding scheme.

“This is the area to the west of St Bartholomew’s Church running up Ann Street past the Primary School to the top of the road (Phase 4 area shown on the map on the next page).

“The council will be doing its best to find financial resources to complete this area in the future.

“The council can appreciate that everyone who lives, works or goes to school in the area will have put up with a fair degree of disruption and it would like to thank you for your patience. The completed works will help to improve the area for the benefit of all.

“You can find out more about the project online: www.brighton-hove.gov.uk/livelycities and www.facebook.com/livelycitiesbrighton.”