Big question for the Big Green Youth Rally in Brighton today? Where to park!

The big question for at least one party member attending the Big Green Youth Rally in Brighton today (Saturday 2 May) was where to park.

Her colleagues said that parking charges were “astronomical” and that she used Hartington Road as it was free there.

Another suggested leaving her car in the “residential outer suburbs” and taking the bus in – the park and ride approach opposed by local party members.

Another said: “Brighton can be pretty bad for parking.”

According to the event’s Facebook page, more than 120 people were invited and 50 are due to attend.

Caroline Lucas, who hopes to be re-elected as the MP for Brighton Pavilion, is due to speak along with comedian and writer Mark Steel.

The parking question came from Harriet Axbey, a teenager from New Malden, which is just 15 minutes from Clapham Junction by train.

On Monday she asked: “Is there parking? (Not very Green I know!!)” 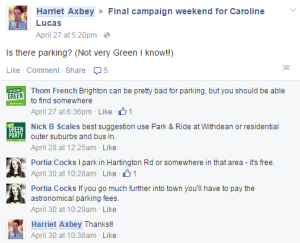 Thom French, a Chichester and Bognor Green Party member, replied: “Brighton can be pretty bad for parking, but you should be able to find somewhere.”

Nick Scales, a party member from Surrey, said: “Best suggestion use Park & Ride at Withdean or residential outer suburbs and bus in.”

Portia Cocks, a candidate in Forest Row, which is less than 90 minutes from Preston Park on the 270 bus, said: “I park in Hartington Rd or somewhere in that area – it’s free.

“If you go much further into town you’ll have to pay the astronomical parking fees.”

Her candidate profile for the local elections said that she was an advocate of public transport.

She was, it said, a campaigner for the successful petition to include Green Party leader Natalie Bennett in the televised national party leader debates.

And it said: “Portia has been passionate about environmental issues in Forest Row and Sussex since completing a project on global warming at the age of 14.”