Barges are due to land 17 steel cans on the beach in Brighton next month. The cans will form the tower or shaft of the i360 as construction work steps up a gear.

The delivery from a specialist contractor in the Netherlands is scheduled to take place – weather permitting – on Thursday, June 11. It will follow the excavation of an 8.5 metre hole.

About 7,000 tonnes of gravel, shingle and chalk are being sucked out of the ground as the i360’s basement takes shape. 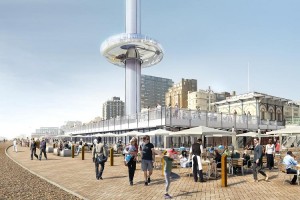 A vacuum extractor truck arrived yesterday and is being operated alongside the 80-tonne crane that was already on site. The truck also filters the air. Tests in London found that its exhaust was cleaner than the surrounding air.

As the team are digging below the water line, industrial pumps are in place to stop the site flooding with sea water while the shingle from the increasingly-large hole is being put to good use elsewhere.

The vacuum excavator truck sucks the shingle and chalk from the site to the nearby beach where it is being shaped into a platform.

Once the platform has been covered with wooden matting it will hold the red crane ready for the arrival of the i360’s main shaft.

When the cans are landed on the beach, they will be lifted into place one by one by another piece of heavy machinery called a jacking tower.

Interest in the work is already increasing and the arrival of the cans in June promises to attract considerable crowds to the seafront.

Eleanor Harris, the i360’s chief executive, said: “We already have a lot of people passing by who stop to watch the construction and ask questions but now the big work is getting under way there will be lots more to see.”