Police in Brighton are searching for 39-year old Richard Blackwood who was sentenced in his absence at Hove Crown Court on Friday (22 May) to a total of three and a half years. 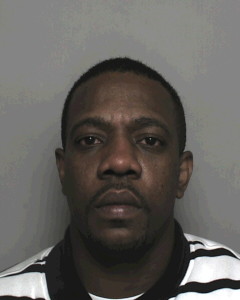 Blackwood, from Greentrees Crescent, Lancing, absconded while on court bail after giving his evidence during the second week of his trial in March this year and has not been traced since.

He was sentenced to 3½ years imprisonment having been found guilty of possession of cannabis with intent to supply, one year concurrent for money laundering, a four-year disqualification from driving under Section 146 Power of Criminal Courts Sentencing Act 2000 – granted as he regularly used motor vehicles to undertake drug dealing, and a new five year Financial Reporting Order in relation to a previous conviction for dealing in Class A drugs.

His fellow defendant and partner Melissa Miller, 30, received a six months sentence, suspended for two years, having been found guilty of money laundering.

A third defendant Luke Pullen, appeared for trial in March, and was found not guilty.

Blackwood is described as black, 5ft 10in, with short dropped hair and a moustache, and regularly wears expensive branded clothing. He has connections in Brighton and Hove and also in the Wolverhampton area of the West Midlands.

Detective Constable Danny Swietlik, of the Sussex Police Serious Organised Crime Unit said; “We worked closely with our colleagues from Brighton and Hove division and this resulted in Blackwood’s successful conviction.

“Blackwood was fully aware of his level of criminality and his leading role in drug dealing in the city. He left his partner alone in court to face the music for the crimes he committed and that she was involved in.

“As he was not present at sentencing he may not know that he is now disqualified from driving. The use of Section 146 to disqualify people from driving was used by the court in this case as Blackwood drove more than 74,895 miles in a three year period drug dealing just in the city of Brighton and Hove.

“We have tried to make contact with Blackwood to hand himself in but yet this has not happened. Anyone who knows where is he is asked to contact us via 101@sussex.pnn.police.uk or call 101, quoting Operation Sandburg. You can also contact the independent charity Crimestoppers anonymously on 0800 555 111.”