A new neighbourhood team to tackle issues such as dog mess is being planned in a bid to clear up Brighton and Hove streets. 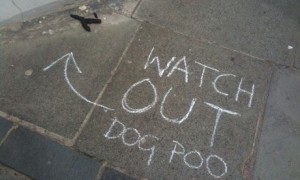 The news comes as figures show just one fine was paid for dog fouling last year – which was an improvement on 2013, in which no penalty notices were issued.

The fine was issued on July 17 last year in Upper Gardner Street, along with another for having a dog off a lead.

Emma Daniel, the city’s lead councillor for neighbourhoods, communities and equalities, said: “Now that our refuse collection services are more reliable, we will be looking at how we can support communities with a team who are enforcing the rules on dog fouling, fly tipping and other bad behaviour which make the streets and neighbourhoods unpleasant.”

The figures were revealed in answer to a freedom of information request made by Brighton mother Molly Talbot-Vine, who has abandoned a pre-school park project because of the dog mess.

She said: “I think Brighton has a serious problem with dog mess. Our route to Balfour School is notorious, and many parents cross the road to avoid it, but this means crossing four more junctions which is not safe, especially when you have a toddler in tow.

“When people do bother to pick up they seem to struggle to dispose of it properly, often the bins for dog mess are overflowing in the local parks.

“It’s not just the Preston Park area, it’s all over the place.

“I have been doing a pre-school group with the outdoors project in St Ann’s Well Gardens for the last few months with another local mother but we’ve decided to give it up as the park is totally full of dog mess.

The council’s response also stated that there are 4.1 full time equivalent employees who are responsible for enforcing dog control orders.