A new report favouring a runway at Heathrow and not Gatwick has been slammed by people in Brighton and Hove – for very different reasons. 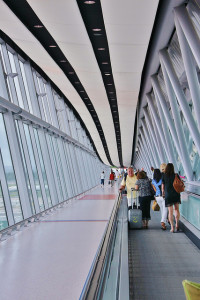 Business leaders say if Gatwick does not get a second runway, the city will miss out on “enormous knock-on benefits”.

But environmentalists say neither scheme should go ahead, and that the effects of air pollution on the region far outweigh any economic boost.

Geoffrey Theobald, leader of the Conservative group on the city council and a member of the Greater Brighton Economic Board, said: “It is very disappointing that Sir Howard Davies’ Airports Commission has not come out in favour of a second runway at Gatwick which I personally think had by far the better case.

“Of course the final decision rests now with the Government and I hope that they may still be persuaded to go with Gatwick as I believe it will have enormous knock-on benefits for the economy of the Greater Brighton area.

“I very much hope that this doesn’t now knock back the growing momentum for a second Brighton rail mainline – BML2 – something which I believe is vital for the area, regardless of the final Gatwick decision.”

And his comments were echoed by the Coast to Capital LEP, which said: “Our view remains that Gatwick is clearly the best choice. It is the most deliverable option, with the least impact on the environment and the lowest cost. We would urge the Government to be decisive and to give the all options full consideration and we hope that Gatwick will finally be given the green light.”

However, Brighton and Hove Friends of the Earth transport campaigner Chris Todd said the best option would be for no extra runways, and instead called for the aviation industry and frequent flyers to be taxed more.

He said: “At the moment, the airline industry is not paying for the damage it’s causing – there’s no tax paid on airline fuel even though it’s contributing to climate change.

“The impact in the south east from the air pollution and noise pollution are serious issues. Poor air quality is killing 29,000 people in the UK every year, and 115 people a year die prematurely in Brighton and Hove.

“The trains can’t cope at the moment and the government doesn’t seem to be that serious at looking at alternatives like the Lewes to Uckfield line. Stick a runway at Gatwick and the whole thing is going to melt down completely.

“The business case is dubious too. Only 12% of all flights are business flights, and you could expand that within existing infrastructure.”