The Cameroon international played 14 times for Wigan Athletic last season. He has also played for Olympiakos, having started his career with Metz.

He is Albion’s third major signing of the close season.

The club said: “The 27-year-old has agreed a two-year deal and joins the club on a free transfer after the defender’s short-term deal at Wigan Athletic ended in May.” 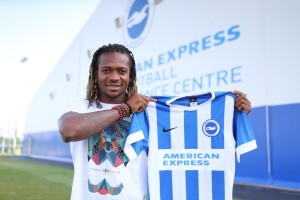 Gaetan Bong signs for the Albion at the American Express Community Stadium, Brighton and Hove, England on 2nd July 2015.

Manager Chris Hughton said: “Gaetan is a player that we were aware of before he came to England, while he was at Olympiakos in Greece.

“When he joined Wigan in February it provided us with the ideal opportunity to monitor his progress in England.

“That gave us a really good opportunity to watch him at close hand in the Championship and we saw him a lot during that time and he was one of the outstanding players for them.

“Gaetan has played top-flight football in France and Greece and has experience at international level which has been key for us this summer.

“He is very athletic, he is a natural left-sided player and it is important to have that balance in the squad.”

Bong played for three French clubs at the start of his career. After Metz, he had a brief loan spell with Tours before moving on to Valenciennes and made 87 appearances.

He then went to Greek side Olympiakos in August 2013 and featured in four Champions League games before joining Wigan Athletic on a free transfer in February.

The Cameroonian made a total 14 appearances for the Latics and played against Albion at the DW Stadium in April.

Bong represented his country at the 2010 World Cup Finals in South Africa and also played for France at under-21 level.

Woman treated by paramedics after lorry and car crash in Brighton