An increase in the amount of murals appearing around Brighton and Hove has prompted the city council to review how it deals with them. 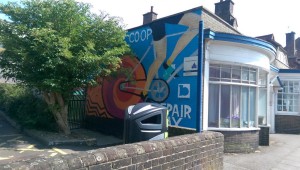 Brighton and Hove City Council has previously taken a hard line with unauthorised commercial murals, particularly in the city centre where it has required businesses to remove adverts on buildings.

But with even more murals popping up on shops and private houses throughout the city, it is now looking again at how it approaches the issue.

A council spokesman said: “As with all planning matters each case is assessed on its own merits. We’re are currently considering our approach to dealing with murals both on private dwelling houses and commercial property.

“There are a few sites around the city of Brighton and Hove where murals have appeared, particularly over the last year and we are considering the powers available to us and the most efficient and effective form of action.

“We would like to deal with this matter in a way that balances the creative nature of the city with the protection of local visual amenity for the benefit of all concerned, residents and businesses alike.”

Many of the recent murals are from renowned graffiti artist Aroe MSK, who as well as undertaking official commissions from corporate clients such as the i360 and Indigo pubs has also painted striking murals on private homes in Viaduct Road and Hartington Road.

The two Viaduct Road murals were painted as a tongue-in-cheek response to a council request for people owning houses in the run-down street to tidy up the frontages. The council said it would investigate the first, which featured a Queen Victoria statue and a bulldog.

The mural pictured above, for the University of Brighton’s bike co-op at Mithras House on Lewes Road, was reported to the council in May and an investigation was subsequently carried out, but the council decided not to take any action.

An officer told the member of the public who reported it: “It is likely that it does constitute unauthorised signage,  but given its location and the character of the surrounding area it would not be in the public interest to pursue prosecution for an unauthorised advert as no significant harm is caused.

“The building is neither listed nor in a conservation area and as such we must consider the expediency of any further action, given the lack of any significant harm.”

The Pie Society mural, which the restaurant was told to paint over in 2013, has not yet been removed even though the restaurant has stopped trading and another retailer is now trading from the unit.