The West Pier arches restoration which saw 26 fishermen’s arches brought back to use as shops and a public toilet has won a conservation award. 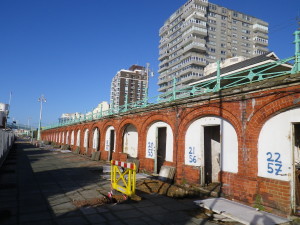 The project started in November 2012 and completed when the shops began opening last summer. Specially-made bricks were used along with hand-crafted wooden doors and window frames. New cast iron railings were made using traditional techniques and Victorian patterns.

Midway through the project, its importance was underlined when another arch at the Fortune of War on the other side of the West Pier collapsed, leading to the nine-month closure of the A259 above.

In a second phase, a further 33 arches further east are now being restored, due for reopening in summer 2016.

The council’s environment spokeswoman, Labour’s Gill Mitchell said: “The Heritage Trust judges agreed this has been a superb, high-quality piece of work, which is continuing into the next phase.

“It would be difficult to find a seafront in the country where more investment is either underway or planned. Certainly no other resort in Sussex has anything like it.” 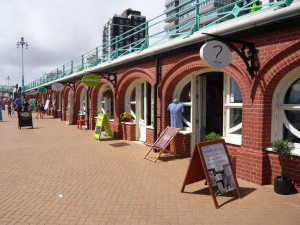 Councillor Pete West, the Green’s environment spokesperson, said: “The renovation of these arches was one of many projects that we initiated and won funding for whilst in administration to restore and improve our seafront and the city.

“While celebrating our Victorian heritage, the arches also house new artist studios which bring a vibrant atmosphere to the area, while, crucially, holding up the main seafront road for the foreseeable future.

“I’m very proud of our success in attracting investment for this and other sections of the seafront which will enable further improvements over the next few years. With the i360 tower rising up from the beach, it’s exciting to see our vision for seafront renewal steadily unfolding.”

Among current projects, the 160-metre, £46m i360 viewing tower is being built and is scheduled to open next summer. Around £9m has been won from the Department for Transport to reinforce the junction of West Street and the A259 and restore the adjoining seafront Shelter Hall. It closed as a gym in 2013 when serious structural defects were found.

The authority is currently looking into how to fund a multi-million pound restoration of the Madeira Terraces east of Brighton Pier, where structural faults have also forced closure.