Almost two thousand people have joined a campaign to save a busy Hove post office after plans to close it were revealed. 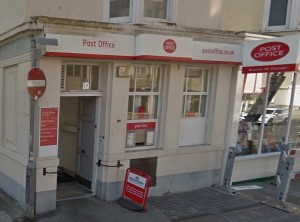 Green councillors for Brunswick and Adelaide launched the online petition to stop the post office in Western Road being closed in January next year, and to date it has been signed by 1,874 people.

Post Office Limited launched its own public consultation last month, saying that the existing provision would be “merged” with a post office on Melville Road, about a mile distant up a hill.

“ People have commented that they use the service every day, and that the service is so good there that they come from other parts of town to use this post office.

“It’s at the perfect location in the heart of Brunswick Town and the centre of the local community. The alternative provision put forward will be inconvenient if not inaccessible to many residents.”

Phelim Mac Cafferty, fellow ward Councillor for Brunswick and Adelaide ward said: “I would really like to know the rationale for this move: the post office is much-loved and incredibly well used. It seems to be yet another penny-pinching exercise from the Post Office.

” Further, the proposed closure will hurt our infirm and elderly residents hardest who will have to go all the way to Melville Road post office- that’s a mile away up steep hills. The sad reality is that those residents simply won’t bother so in effect this proposal will cut them off from post office services.

“Have Post Office tested their decision to make sure it won’t disproportionately harm some parts of the community?”

The Post Office says the merger is needed to secure the long-term viability of local post office services, and that the number of people using the post office has declined to the point that it’s no longer commercially sustainable.

Roger Gale, Crown Network General Manager, said: “We understand how important Post Office services are to people in the area We want to make it easier for customers to do business with us, and we are confident this merger will meet the needs of customers in the area and help us to secure services for the future.”

Post Offfice’s 12-week consultation closes on 16 September 2015. Comments and questions can be submitted through our online questionnaire at postofficeviews.co.uk, by FREEPOST Your Comments to Post Office Ltd, via email to comments@postoffice.co.uk, via the Customer Helpline on 08457 22 33 44 or Textphone 08457 22 33 55.

In all communications, customers are asked to quote branch code 01090799