Supertides to hit Brighton and Hove next week

Supertides which could reach 7m above normal water levels are predicted to peak on Tuesday and Wednesday next week, prompting a warning from the Environment Agency. 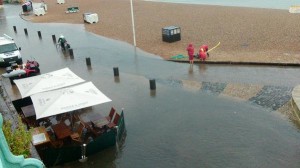 And a storm surge or other adverse weather conditions could drive them even higher, leading to another bout of flooding along the seafront.

Southern Water says it is making emergency preparations to deal with the potential impact of the tides. A spokesperson said: “We have urged people to contact us on the emergency floodline if their home or property has been flooded by water on 0330 303 0368.

“The company is also reminding people that county councils and unitary authorities deal specifically with groundwater flooding, and we would urge members of the public to contact them in the event of a flood in public areas.”

The high tides are the result of the sun, moon and earth aligning to create a greater than normal force over the oceans.

A spokesman for the Environment Agency said it was expecting the tides to start from Sunday, but added that for them to have impact, they would have to coincide with unsettled weather.

In a blog post published today in conjunction with the Met Office, John Curtin, Environment Agency’s Interim Executive Director of Flood and Coastal Risk Management, said: “The flood risk is low over the next few days. Some of the highest spring tides of the year start this weekend but as we are not expecting any unsettled weather, it is unlikely that this will lead to flooding of coastal locations.

“The Environment Agency is monitoring the situation closely alongside the Met Office and local authorities, and will issue flood alerts and warnings if required.

“People should check their flood risk and keep up to date with the latest situation at https://www.gov.uk/check-if-youre-at-risk-of-floodingor follow @EnvAgency and #floodaware on Twitter for the latest flood updates.”