Young man impaled on railings after fall from Hove balcony

A young man is in hospital with leg injuries after he fell from a balcony in Waterloo Street on to railings below last night (Wednesday 30 September). 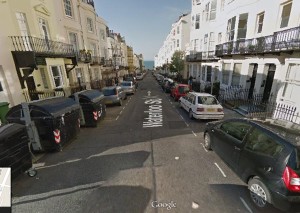 The 28-year-old fell from the Hove flat at about 9.25pm last night after the balcony wall gave way.

He was released from the railings by firefighters and is being treated at the Royal Sussex County Hospital, in Brighton, for leg injuries which are not life threatening.

An investigation is expected to begin into how the balcony, which is part of a privately rented flat, gave way.

A spokesman for Sussex Police said: “The incident is being treated as accidental, there is no further police investigation and the matter will be reported to the local authority and Health and Safety Executive.

“The road was closed for a time while the incident was dealt with and we would like to thank local people for their patience.”

A spokeswoman for the South East Coast Ambulance Service said it received a call to reports a man had fallen of a first floor balcony onto railings beneath.

Several vehicles were dispatched to the scene, including two ambulance crews.

She said: “The patient had suffered serious injuries from the impact. He was treated at the scene for severe bleeding  and taken to Royal Sussex County Hospital for further treatment.”

A spokeswoman for East Sussex Fire and Rescue Service said that three fire engines from Hove and Preston Circus were called by paramedics to help at the scene last night.

She said: “Firefighters assisted ambulance crews in lifting the casualty to safety, who had been impaled on railings.

“The casualty was left in the care of South East Coast Ambulance Service.”