The controversial Valley Gardens scheme is set to be delayed until next year while further traffic reports are compiled. 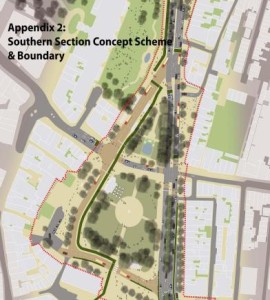 The reworking of roads from St Peter’s Church to the Old Steine was approved in the final months of the Green adminstration after it received £8m of government funding.

One of the new Labour administration’s acts after it came into power in May was to commission independent reports which included data on how the proposed new layout would cope with weekend traffic levels.

And now, the council’s environment, transport and sustainability committee is being asked to approve yet more reports in October, as this is the first month in which “neutral” traffic levels, unaffected by seasonal variations, will be available.

One of the issues is changes made to the original scheme proposal, which reduced the number of general lanes in both direction from four in parts to two along its length in order to preserve trees and simplify traffic flow.

This is supported by the Greens, but Labour argues the original scheme will cope with traffic levels more effectively, and stop traffic displacing to London Road, Lewes Road and even Woodingdean and Rottingdean.

A report to next Tuesday’s committee meeting says: “Based on the draft review, it is likely that the final review will conclude that the modelling used in the business case is robust. However, the review recognises that the current preferred scheme, agreed by ETS Committee in October 2014, differs from that in the business case.”

It adds: ” A formal request has been made to the Local Enterprise Partnership for the funding to be either transferred between financial years to 67 facilitate delivery and optimise use of funding, or applied to other capital projects within the approved capital programme provided that the same amount of funding will be spent on the project in future years.

“Dependant on the confirmation of funding conditions, the amended capital funding profile will be reported to Policy and Resources Committee for approval to be included within the capital programme.”

The final report, undertaken by Project Centre Limited (PCL), is expected to be presented to the committee in March next year.