Play spaces promised as part of a new housing development have been left “dangerously” unfinished for months with work to complete them only starting after public pressure. 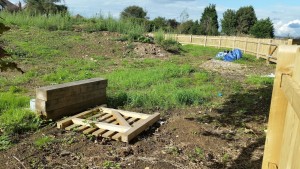 Bellway Homes were granted permission to build 31 homes on the former Redhill sports ground in 2011, on condition two play areas were provided for the public and a local scout group.

But although the homes were completed and most were sold last year, the playground remained unfinished, with potholes, debris and half-assembled benches left open to the public.

Work finally began on the site this week – but only after resident Vicky Cohen started a petition and Brighton and Hove News contacted Bellway’s press office.

Mrs Cohen said: “I’m delighted that Bellway has responded. They have acted really quickly but I think the reason they started is because Brighton and Hove News contacted them.

“I have been talking to them since before April 2014, when we moved in. It was due to be finished in July 2014, then Christmas then March, then nothing happened all this summer.

“It’s been incredibly dangerous. The grass areas are largely un-mown, with grass covering the debris and dips, and the bins are overflowing with dog-mess bags and rubbish.

I spoke to one neighbour who saw a grandfather sit on one of the benches which hadn’t been screwed in properly and he fell on the ground.

“The council refused to take it over because it hadn’t been completed to their standards. 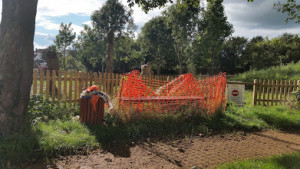 “But Bellway are absolutely nailing it now. My four-year-old son’s going to be delighted. One of the reasons we bought our house is because of the fabulous open space behind it.

“My husband used to live in Redhill Close in a house that backed onto the same land as a child, and it’s really nice that our son can have access to that as well.”

A spokesman for Brighton and Hove City Council said: “Planning permission was granted for homes on the site, with a Section 106 agreement that some land be transferred to the council for recreational open space and some to a local scout group.

“As part of that agreement, Bellway Homes are required to carry out provide play equipment on the open space and carry out landscaping work to a required standard, before the council takes over the  maintenance of the site.

“We are aware of the concerns of local residents and want to see this work completed by Bellway as soon as possible, so that residents can enjoy the open space.

“We are in contact with Bellway Homes about their outstanding obligation to carry out the work and, if necessary, we will take formal enforcement action to ensure it is completed.”

The petition has now been signed by more than 1,800 people, although Mrs Cohen says she intends on taking it down soon as the council has been so helpful.

A spokeswoman for Bellway Homes said: “While it has always been our intention to finish the area, it is regrettable that we have had a number of obstacles in our path which have slowed our course of progress more than we would have liked.

“Our final purchaser moved in during August 2015 and while we complete these works, we have maintained the presence of a dedicated customer service team located on the development.

“Works on the unfinished play area, which is no more than 20% of the overall space, stopped briefly as the whole area had to be secured robustly before being sprayed with weed killer and the hand picking and machinery teams could resume their work.

“It is fully fenced (at our cost) with no access signage to prevent injury and ensure safety to any person whilst we finish works.

“We take safety very seriously, and despite these measures, we still have to deal with unauthorised site access by adults in order to place posters asking for people to petition to ‘force’ completion of area – when clearly we are still there trying to finish.

“The works are due for completion by the end of October and we look forward to welcoming visitors to their new park from that time onwards and into the future.”