A plan to move the Brighton Station taxi rank back to Terminus Road has been put on hold.

A Brighton and Hove City Council committee had been due to discuss the plan today (Tuesday 24 November).

The Environment, Transport and Sustainability Committee was to be asked to approve an 18-month trial. 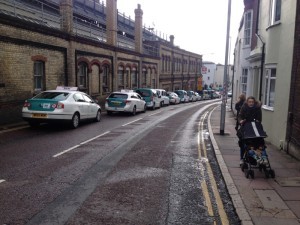 The aim was to stop queuing taxis from disrupting buses, pedestrians and clogging up nearby streets.

Instead council officials will carry out further consultation. The decision to defer the move was reported to council members by Councillor Gill Mitchell, who chairs the Environment, Transport and Sustainability Committee.

A report to the committee, which is meeting at Portslade Town Hall, said: “There are a number of ongoing issues associated with taxis using the station taxi rank. These are

“An increase in enforcement has resulted in a reduction in these issues but is costly and not able to remove the problems entirely. Recent changes in national guidance mean that enforcement by CCTV is no longer an option.”

Terminus Road was used as a temporary taxi rank while the station forecourt was revamped earlier this year.

Taxi bosses and Brighton and Hove Buses said they would like the move to become permanent.

But any scheme would have to address concerns over the impact on surrounding streets.

The trial had been expected to incorporate road changes such as reversing the one-way flow in Clifton Street and closing part of Buckingham Place to general traffic.

The report said that the current situation was not ideal partly because of the disruption to buses and pedestrians.

It was also said to spoil the improvements to the station forecourt – and the station has now increased the times when the rank is closed.

During these times – and at peak times – unofficial queues of taxis have built up in Surrey Street, disrupting residents with fumes and tooting horns.

When the rank was in Terminus Road, the noise in Surrey Street decreased. Traffic monitoring showed reduced traffic in the area and reduced strain on the Clock Tower junction and bus reliability improved.

In March, when the rank was still in Terminus Road, Brighton and Hove Buses managing director Martin Harris blogged: “This 21st century return to the old ways has worked far better than we had expected.

“The crucial thing is that it’s removed through traffic from across the front of the station, making things much safer and less congested for bus users, cyclists and pedestrians.

“As far as I know, the taxis liked it too, as it avoided the ‘taxi gridlock’ that happens around the station at peak times.

“No through traffic through Queen’s Road also has benefits down at the Clock Tower for pedestrians, cyclists, buses and taxis, improving the capacity of that difficult crucial junction for all of us.

“So if it works for the city’s taxis around the station, chances are it’s going to work for all of us.

“And I’m going to be backing the idea that a rank up Terminus Road becomes a permanent fixture. Will you join me?”