Soaking cyclists, wet but exhilarated, huddled into the Brighthelm Centre after braving the elements on their first leg of a four-day journey to Paris. Together they will cycle 25,000 miles. 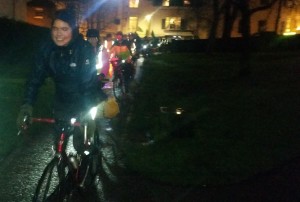 Cyclists arriving at the Brighthelm

Cyclists of all ages and from all corners of the country met in London – they came from Bristol, Cambridge and Scotland – and rode through snow and at night all week to reach Brighton yesterday (Sunday 6 December).

Duncan Blinkhorn, who chairs Brighton’s Climate Action Network and Time to Cycle and who is colloquially known as “Mr Bike Train” said: “It was a tough ride, the longest of all the days (from London to Brighton). The wind was against us all the way. It was drizzling or raining and quite a test for a lot of people.”

The team will have flags and a sound system as well as a slide show of images projecting photographic messages on to buildings when they arrive in Paris.

Rebecca Webb said: “It’s great, that feeling of doing something together. Everyone is smiling. When somebody’s tyre went flat or when a horse stopped, everyone stopped.” 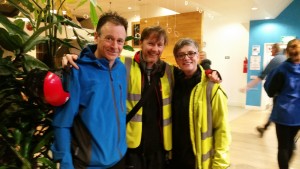 Mr Blinkhorn said: “As a collective, there is a power and resilience. On your own, you would be very miserable because of the weather.”

He said that environmentalists have been engaged in this struggle and campaign for climate change for 20 years.

The cyclists were greeted by Caroline Lucas, the Green MP for Brighton Pavilion.

She said: “It is wonderful to feel the energy and excitement in the room. It is sheeting down with rain and the cyclists are taking inspiration from each other.

“We need to wake up and shift to a zero-carbon world. Whatever you do, you think it is not enough. Small differences make a difference. Be empowered to have a conversation.

“Instal solar panels, eat less meat, recognise the need for public transport. There is value in all of those options.

“Do what you can. Don’t do nothing. You can’t do everything.

“I feel overawed by the task at hand and it can be easy to be disempowered.”

When asked about the talks under way at the Climate Change Summit in Paris, Caroline Lucas said: “There is no binding agreement to keep the temperature below at least two degrees, no commitment on finance and no compensation to poorer countries.

“But we are nearer at this summit in Paris than before during the climate change talks in Copenhagen.”

The talks in Copenhagen in 2009 involved the United States and China for the first time. The problem is that the Copenhagen Accord was not legally binding and there was no global target for emissions reductions by 2050. The accord was also vague about its goals including the $100 billion needed annually by developing countries.

As Caroline Lucas addressed the cyclists, she said about the COP21 conference in Paris: “The talks are nowhere near binding. We must make sure we are feeling upbeat. This is a key moment and there is still scope for moving from the negotiators’ position.”

Ministers from across the world will be negotiating the agreement this week, starting today (Monday 7 December). Environmentalists are trying to secure target emission reductions between 2020 and 2030 and to prevent a temperature rise of more than 1.5C.

Caroline Lucas said: “We want and demand a secure future for us and our kids. The government is privatising the Green Investment Bank. The capitalist system must be cracking.”

She thanked the cyclists for putting their politics into practice by embracing the physical challenge of a long-distance cycle ride in December.

Finally, she said: “Nature is giving her tuppensworth. Five out of six of the wettest years on record have been since the year 2000.

“Another world is not only possible, she is on her way.”

The Reverend Alex Mabbs, minister of the Brighthelm Centre with a specific responsibility for climate change, welcomed everyone including a team of cyclists from Edinburgh and said that a couple had cycled all the way to Paris from Vietnam.

He said: “It is not enough to show that we are on the brink as a global community this week bombing Syria. History is knocking on our door, politicians are doing what they have always done. People like us are showing a different way is possible. It just needed time.

Alex Mabbs asked: “Who needs a third runway at Heathrow when we have a bike? We choose co-operation and peace. There is a depth of community here that we didn’t know was possible.

We bring a little bit of tomorrow, today, with every turn of the wheel.”