Families of children with special needs held a protest outside Brighton Town Hall before the final council meeting of the year yesterday (Thursday 17 December).

They are worried about changes being made which the Labour-run council said were intended to provide help in the school holidays as well as during term time.

Some staff will lose their jobs and some savings will be made as fewer buildings are used, with the merger of schools.

But the council said that some people were confused by a number of different changes taking place at about the same time. 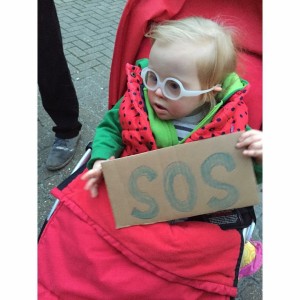 And one Labour councillor, Tom Bewick, said that much as he would like to blame government-driven austerity cuts, he couldn’t. The changes were intended to improve provision.

A petition signed by more than 10,000 people was handed in to the council and will be debated in the new year.

Among the demonstrators outside the town hall were families from T21 Brighton and Hove, the local support group for children and young people with trisomy 21 (Down’s syndrome) and their families.

Philippa Hodge, speaking on behalf of the group, said that parents had joined the demonstration because they were concerned that proposed changes would directly disadvantage their children’s education.

She said: “We welcome the local authority’s proposal to centralise services and make them easier for families to access and we too aspire to a more joined-up service that wraps around our children.

“We also recognise that local government budgets have been slashed and services need to run more efficiently.

“However, we are extremely concerned that within the LSS (Learning Support Service) proposal, is the intention to disband the current format of the vital Presens (Pre-School Special Educational Needs Service) specialist service, which we rely on.

“We fear it will be hugely diluted during this overhaul, with direct repercussions that undermine the core principles of inclusion and early intervention – cornerstones of the local authority’s five-year strategy for all children and young people.”

“We all know that pre-school children develop rapidly in these early years.

“Nursery staff are laying the foundations for children to thrive both in the classroom and in the playground.

“Nurseries actively ask for the specialist knowledge and practical guidance that is currently provided by the Presens Team, who work alongside staff and parents to create targeted support plans.

“The majority of our youngsters are then able to move confidently into their reception year within a local mainstream school.

“Presens intervention must continue to be delivered by Presens specialists, visiting our children in situ, working with them and key nursery staff, rather than by general SEN (special educational needs) advisers, who would be trying to cover children and young people of all ages and potentially delivering phone-based support rather than face to face intervention.

“So we are asking that Presens is recognised and retained as a specialist outreach team within the Learning Support Service (LSS) alongside the Sensory Support Service, which also provides practical expertise to many of our families.

“We ask for this in order to protect our children’s right to an inclusive education in line with the aspiration ‘No Child Left Behind’.

“Our children will continue to require varying degrees of intervention from the LSS throughout their school years.

“Within our T21 community, we aim high. We don’t just want our kids to be ‘at school’. We want them to reach their full potential, as is their right, and that means providing the expert support they need, from the outset.”