Brighton Kemptown MP Simon Kirby joined staff at a swimming school in his constituency as they celebrated their fifth anniversary and a makeover of their premises.

Brighton Swimming Centre, in the old St Mary’s Hall school pool, in Eastern Road, Brighton, has been transformed over the past five years with new changing rooms and shower areas. The building also has new suites of training and meeting rooms.

More than 3,000 children and adults now visit the centre each week and it has become the busiest swimming pool in Britain for the training of swimming teachers. 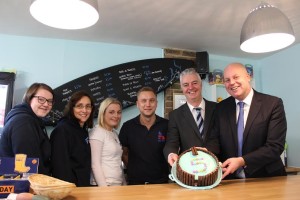 Mr Kirby said: “I was delighted to visit Brighton Swimming Centre again yesterday and see how the centre has developed over the last five years.

“It is a great facility that is nationally recognised for its role in finding employment opportunities for people who train at the centre.

“I would like to congratulate the staff on the fantastic work they do.”

The swimming centre’s managing director Paul Smith said that there were plans to modernise its plant room. This would give it one of the greenest and most efficient pool plant systems in the area.

A new lighting system for the pool is also planned including the restoration of its underwater lights.

Mr Smith said: “It’s been a big learning curve since we took over five years ago. However, it’s turned into a real success story.

“So many swimming pools have been lost to the city. I am proud to have been able to save one.

“I would particularly like to thank our local MP Simon Kirby whose steadfast support has been invaluable.”

For more information about the Brighton Swimming Centre, phone 01273 434400 or go to www.brightonswimmingschool.com.