A Brighton dad who ran 80 miles barefoot is now training for his latest challenge – a 5k handstand walk along Hove promenade. 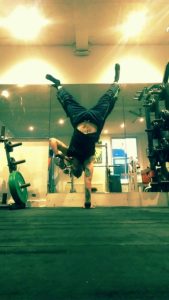 Joe Addison is well known in the city for his barefoot runs, the most impressive of which was the 240-hour, 80 mile run around the Preston Park velodrome in September 2014.

But he is now swapping his feet for his hands after a fellow runner joked that he should tackle his next challenge upside down.

Mr Addison said: “The idea was actually given to me as a joke by a fellow runner. I run Parkrun most weeks, which is a free weekly timed 5k run completely on a volunteer basis. I am a former gymnast (when I was a child) so I quite often post handstand selfies from the gym I work in.

“After one such pic, someone asked me if anyone had done parkrun on their hands and I jokingly said challenge accepted. The more I got to thinking about it, the more I realised it was ridiculous but still just about achievable.

“I raise money and volunteer for Macmillan Cancer Care quite a lot in memory of my dad Roy who passed away in 2010, he was a big supporter of my gymnastics so this seemed like quite a good idea.

“There is a possibility for a world record, I’m waiting to hear back from Guinness about that though.”

As you might expect, he spends a lot of his training time upside down, with static handstands, strength training and even hanging upside down on an inversion table.

He said: “The real difference from running is that I have no real idea how this will go, I’ve never done anything like this before so it may crash and burn but that’s half the fun of the challenge, pushing my limits.”

Unlike his 24-hour barefoot run, he will allow himself breaks on his 5k handstand challenge, but won’t move forwards unless he’s upside down.