The annual Brighton and Hove City Council budget meeting – at which the council tax for the coming year is set – was suspended after a tuneful protest in a packed public gallery this afternoon (Thursday 25 February).

A couple of dozen protesters sang “Solidarity forever” to the tune of the Battle Hymn of the Republic (Glory, Glory, Hallelujah) in the face of cuts. Others held up signs saying: “They cut. We bleed.” 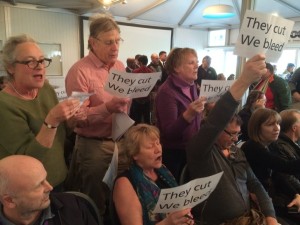 Council chief executive Geoff Raw backed up his outnumbered security staff whose challenge was greater because the protesters were dispersed throughout the audience.

After the more vocal protesters had left or been removed Mr Raw told those who remained: “If there’s any more disruption, I will clear the public gallery.

“You’ve got to allow the elected members of Brighton and Hove to make their decisions.”

After the meeting – at the County Ground in Hove – resumed the mayor Lynda Hyde threatened to call the police if there were more disruptions and urged people to behave like adults.

She then apologised to council leader Warren Morgan for the interruption before asking him to make his budget speech.