Thousands of runners took part in the Vitality Brighton Half Marathon this morning (Sunday 28 February).

The event is the main annual fundraiser for the Sussex Beacon charity although many runners choose to support other charities.

The Sussex Beacon offers specialist care and support to people affected by HIV helping them to lead independent and healthy lives. Brighton has the highest proportion of people living with HIV outside London.

Olympic athlete Sally Gunnell started the race and among those taking part was Sara Cutting, who had planned to run for Macmillan Cancer Support. 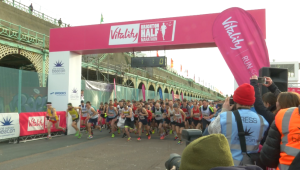 She won admiration by raising money for Macmillan by posting selfies on social media wearing a different hat each day, often captioned with a joke.

She has only recently come out of hospital again after suffering from cellulitis and sepsis in her arm, an after-effect of the necessary treatment she received for her cancer.

Although better, her consultant told her that she couldn’t run so she has decided to walk the course instead. 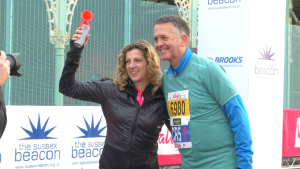 Macmillan praised her bravery and thanked her for the £17,000 that she has raised so far. 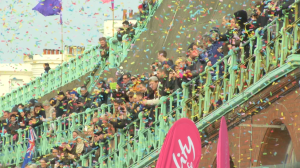