This staggeringly beautiful picture of a dolphin spotted swimming by the West Pier was captured by a Brighton photographer today. 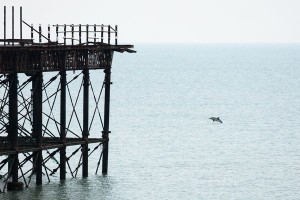 Finn Hopson, who runs Brighton Photograph in the West Pier Arches, grabbed his camera and ran out of his studio after a neighbour alerted him to the rare site.

He said “It was out there for an hour or more, following the same path back and forth past the back of the pier.

“Every now and again it would do a few leaps then disappear for a while, just enough to keep a small crowd of people entertained on a grey day.”