Parents and teachers in Brighton and Hove have started a campaign against the government turning all schools into academies.

More than 85 people attended the event on Wednesday (6 April) at the Friends’ Meeting House, in Ship Street, Brighton, supported by union members and officials from the GMB, Unison and NUT.

NUT branch secretary Paul Shellard said: “Schools are reeling with funding reductions, teacher shortages and an obsession with testing, let alone the problem of an insufficient number of places for pupils.

“The government’s response is forcing schools to become academies when there is no demand for it. They have got their priorities completely wrong. 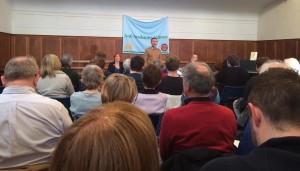 “The ultimate aim of the government’s plans are to deregulate pay and conditions for teachers.

Sussex University education lecturer James Williams said: “They key fact is that the removal of qualified teacher status, even if replaced, is a very dangerous move.

“Individual schools will train teachers to do things their way and their way only.”

A parent, Anna Schwarz, who has two daughters at Varndean School, said that the high standard of teaching was the only thing that compensated for the huge number of exams pupils must take.

She said: “There are some really good teachers who are well trained and really into their subjects. It is important to keep the teaching profession properly trained.”

Many of those at the meeting said that a strong, unified campaign would be able to defeat the plans.

Natasha Steel, one of the lead campaigners from the Hands Off Hove Park School campaign, which successfully opposed academisation in 2014, said that the key to victory was working together.

She said: “Creativity and commitment played a huge part in the campaign. Brighton and Hove have a strong tradition of defeating academisation.” 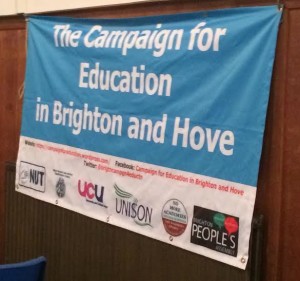 A national petition on petition.parliament.uk to scrap plans to convert all state schools into academies by 2022 has been signed by more than 1,400 people in Brighton Pavilion, making it the constituency with the most opposition.

Aidan Pettit, who used to work at the Department for Education, said that he was incredibly encouraged by the size of the meeting, which had been arranged at short notice.

He said: “It is clear that there is huge opposition. We have a real potential to defeat this. I’m ridiculously optimistic.”

He was one of several people who raised the importance of being clear about an improved alternative to academies.

He said: “There have been models to show that there are ways to manage schools by collaborating.

The No Forced Academies meeting was jointly organised by Brighton Campaign for Education, NUT Brighton and Hove and Hands Off Hove Park along with local teachers and parents.

An organising committee has now been formed and the campaign aims to build a network of resistance to the government’s policy, linking up with campaigns nationally.

After the meeting Natasha Steel said: “We are delighted to have had such a large turnout. This shows the strength of feeling in our city and how much value people place on their local community schools.

“I urge anyone who is concerned about the way the government is stripping away the role of parents, governor and local government from our publicly funded schools to join our campaign.”

Anyone wishing to join should email: brightonedqt@gmail.com.

Trains delayed after police called to deal with ‘disruptive passenger’