A group of students have been saved from early eviction after their landlord was told to convert back the shared Brighton house they rent into a family home. 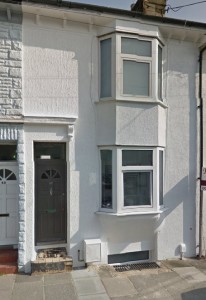 The students, who live in St Paul’s Street off Lewes Road, faced being evicted in January after landlord Daniel Crown moved them into the former two-bedroom terrace without getting planning permission for the new six-bedroom shared house, or HMO.

He had been warned just a month before they moved in by the planning department that he would require planning permission, and a notice giving him three months to move them out was issued in October.

By appealing the notice, he put it on hold, and now a planning inspector has agreed to give him until August 2016 to convert the house back.

It is now listed for sale for £450,000 by Roman Estates, who say it will make a great investment opportunity as an HMO, with an expected rental value of up to £3,000 a month. A spokesman for the agency said the advert would now be changed. The property was last sold in May 2015 for £270,000.

Planning inspector Ken McEntee said: “I appreciate that the current tenants of the property are students and, although the accommodation is only temporary they will nevertheless effectively be losing their home.

“I consider it would be an acceptable compromise and would achieve a proportionate and reasonable balance between the need to bring harm caused by the unauthorised use to an end and the needs of the tenants.”

Meanwhile, another shared student house in Hollingdean Terrace has been given planning permission on appeal because its immediate area is not yet saturated with HMOs – although this new house will tip it over the 10% threshold.

Landlord William Mason appealed against the refusal to convert the three bedroom family home into a six bedroom shared house, which was turned down on the grounds that two of the bedrooms are too small and that there are too many HMOs in the area already.

However, planning inspector Patrick Whelan visited the house and said the bedrooms, while small, were adequate.

And he found that as just five of the 59 houses within a 50m radius of the address were authorised HMOS, which is under the council’s threshold of 10%, over which applications for new HMOs are refused in specified areas of the city.

Mr Whelan said: “From my inspection of the house, I could see nothing unacceptable in the size
of these bedrooms.”

He added: “I note the planning representations from local residents and a councillor including the effect of the proposal on a mixed and balanced community, parking pressure, noise, and refuse storage.

“The rooms of the house are well contained and there is space to store refuse and bicycles in the back garden. Whilst the intensity of use of the house may be greater as [an HMO than a normal dwelling house], it would not have an adverse impact on the living conditions of surrounding occupiers, nor would it exacerbate parking pressures in the surrounding streets.

“I note the concerns of neighbours over the planning history of the site and issues of neighbourliness, however, the council’s reason for refusal is clearly focused on the living conditions of the occupants of the appeal property, and this is the basis upon which the appeal has been made.”

However, he added a condition to the permission requiring the provision of secure cycle parking acceptable to the council.

Leave a Reply to Sam for Freedom Cancel reply