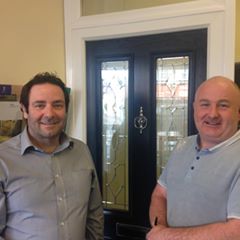 The rough sleeper, Emma, has just been found accommodation, but for the last few months she was often found by the team at Vision Windows bedding down in their doorway as they arrived at work.

But instead of calling the police to move her on, it became a routine that the first person in would make her a cup of tea.

And another shop along there, baby equipment store Great Expectations, gave her new shoes and clothes and a back pack when bad weather destroyed her old one, as well as taking her clothes home to wash and dry.

Their kind deeds have been highlighted by ward councillor Emma Daniel, who said: “Finally, Emma has been given a hostel place and is eating well and sleeping soundly.

“She is looking forward to getting medical treatment she needs and doing skills courses to change her life, having done much towards that whilst living on the streets by herself.

“Agencies have been supporting her and they deserve credit for their hard work too.

“But the kindness of the businesses on the Lewes Road who looked out for her deserves especial praise, especially two who went the extra mile. More than the very practical help they treated Emma with dignity and kindness and are made up for her that her life has turned a corner.”

Ali Wells, secretary at Vision Windows, modestly said she didn’t think they had done that much to help Emma, but were very glad she had now found accommodation.

She said: “She was there sporadically for quite a few months. It’s great to hear that she’s been found accommodation because when she stopped appearing it was quite worrying.

“She used to apologise for sleeping in our doorway. Whoever was first in would make her a cup of tea, and then she would get herself together and move on.”

Brighton and Hove News understands that Emma had been offered accommodation by the council out of the city last year with a view to bringing her back at some time in the future, but family ties to the Lewes Road area meant that she turned it down.